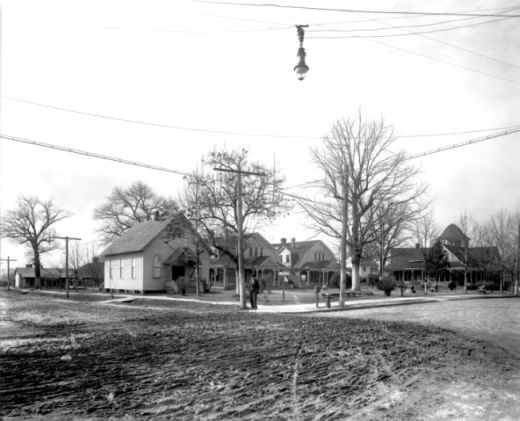 It was not until 1889 that the Confederate Veterans Association of North Carolina was formed and incorporated by the state legislature; the new organization presented as one of its goals the founding and the maintenance of a "home or homes for indigent, infirm and invalid Confederate soldiers and sailors, or their widows and orphans." By September 1890 the Confederate Veterans Association of North Carolina, aided by the Wake County Ladies Memorial Association and the Daughters of the Confederacy, succeeded in raising enough funds to begin leasing an eight-room house located on Polk and Bloodworth Streets, near downtown Raleigh. Within a month, as many as a half-dozen veterans were enrolled in the home, which served, technically, as the first Confederate soldiers' home in North Carolina, though only for a brief time.

A permanent home, complete with medical facilities, was finally established in an act ratified on 14 Feb. 1891, when the state deeded property near Raleigh known as Camp Russell to the newly constituted Soldiers' Home Association-an administrative body consisting of three members of the Confederate Veterans Association of North Carolina, four appointees by the governor, and an advisory board of nine "lady managers." The North Carolina Confederate Soldiers' Home formally opened its doors in May 1891, becoming the fifth state-supported Confederate home in the nation (preceded only by those in Louisiana, Virginia, Maryland, and Texas). Eligible for admission to the home were veterans of either the Confederate army or navy who had served honorably in North Carolina commands until the end of the war and who had "borne a good character since" the war. As many as 1,459 individual Confederate veterans are known to have resided at the Confederate Soldiers' Home from its opening in 1891 to 1926, when the last reliable enrollment figures were kept. Approximately 90 percent of all admissions occurred before 1920, when the average Confederate veteran was well in his eighties. Roughly one-third of these men had been wounded in the war or had suffered from a service-related disability or ailment following the war, and an overwhelming majority had worked as farmers or as nonprofessionals.

During its 47-plus years of existence, the North Carolina Confederate Soldiers' Home accommodated an average of no more than 90 veterans at any one time; enrollment figures exceeded 200 in 1917, although the number who were actually present then at the home was considerably lower. Once admitted to the home, the veteran remained on the roll until he died or was officially discharged or expelled for disciplinary reasons. The average tenure (time in residence) of a North Carolina Confederate Soldiers' Home guest was less than four years.

After the last veteran, Walter Barfield, age 94, left the home in August 1938, the North Carolina Confederate Soldiers' Home officially closed its doors. Soon the property was reoccupied and repaired by the National Youth Association, and the hospital was renovated and reopened as the Raleigh Recreation Center. By 1948 the building was abandoned; today, the intersection of Tarboro Road and New Bern Avenue, where the home formerly stood, is occupied by the North Carolina Division of Motor Vehicles.

Jessie John Hathcock ,1832-1901, of Stanly county, North Carolina died at this soldier's home and is buried in confederate section of Oakwood cemetery in Raleigh, North Carolina.
Note: the volunteers at Raleigh City Museum...I guess are too young to know about this piece of history.....?

My great grandfather Col. Albert Burrow Gorrell had a room in the home named in his honor. I suppose all of that is now gone, or do parts of the room reside elsewhere? I also had a great, great uncle, Bob Gorrell, who was a member of the Guilford Greys and was an officer, I believe. He may have been Albert's brother. I know he was a bachelor and I have a photograph of him. Can you direct me to information that would be helpful in my Gorrell research. It is very difficult getting back further than my 4th great grandfather Ralph Gorrell, whose father, I believe, came from Donegal. I would appreciate, so much, any direction you can give me. Thank you.

I saw your article and

I saw your article and enjoyed it very much. I have just today received some interesting information about my GG Uncle from NC. His name was Aaron Malone . He was admitted to the Confederate Soldiers Home in Raleigh on June 13th 1891. I am, with a LOT of help from a cousin of mine, doing a family tree on the Malone family. How much information do you HAVE on Aaron? Is he the only Malone that you have on record residing at the Home. I know that he died while residing at the Home.. Where would he be buried at? Thank you so much for any info on this!!!

Thank you for visiting NCpedia and taking time to post your history and question.

Genealogy Services at the NC Government & Heritage Library may be able to help you locate resources to answer this question for your family history research.  Please visit their web page for information about the library's genealogy services and their contact information.  You'll find the page at http://statelibrary.ncdcr.gov/ghl/resources/genealogy.html.  And here is a link to answers for Frequently Asked Questions http://statelibrary.ncdcr.gov/ghl/faq.html#genealogy.