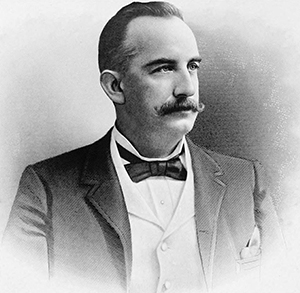 Charles Earl Johnson, businessman, was born in Raleigh, the son of Charles Earl and Frances Iredell Johnson. His mother was the daughter of James Iredell, governor of North Carolina in 1827–28. Young Johnson attended Lovejoy's Academy in Raleigh and also received instruction from the Reverend Dr. R. S. Mason. At age fourteen, he enrolled as a private in the Confederate Army shortly before the war ended. At seventeen he worked as a clerk at W. H. & R. S. Tucker, a Raleigh dry goods store, and in 1874–75 he was assistant secretary of the North Carolina Senate.

Johnson wished to study law, but the decimation of the family fortune during the Civil War and the death of his father in 1876 prevented him from doing so. Instead, he joined a large cotton firm, cotton at that time being the most important staple article in the trade of Raleigh. Within a year, he became manager of the firm of Lee, Whitaker and Johnson. In September 1877 he established his own cotton business, C. E. Johnson and Co., the first to build a cotton press in Raleigh. Johnson was also one of the first to recognize the advantage of exporting cotton directly from points of origin to the interior of the state, and direct exports by his company soon amounted to 150,000 bales annually. Later, as the consumption of cotton increased locally, Johnson's firm decreased exports. His new method of exports reduced the cost of handling cotton between producer and consumer. The company operated a large plant in Hamlet as well as in Raleigh.

Although Johnson described himself as a "zealous supporter of the Democratic party," he never actively sought political office. Nevertheless, in 1905 Governor R. B. Glenn appointed him a member of his staff with the rank of colonel. Johnson also served as a member of the Raleigh city council. An Episcopalian, he was vestryman of Christ Church parish and for thirty years treasurer of the Diocese of North Carolina. He was an avid fisherman, and his tackle box was said to have been one of his most valued possessions.