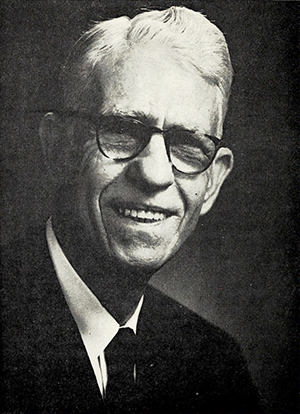 Maloy Alton Huggins, educator and religious administrator, was born in Marion County, S.C., the son of A. R. F. and Alice Lundy Huggins. He attended the common schools of his home county and, from 1905 to 1908, Stinceon Institute in Orrum, N.C. Through a loan from R. C. Lawrence, Huggins was able to enter Wake Forest College in the fall of 1908; he received the B.A. degree in 1912. He was awarded M.A. degrees by Wake Forest in 1916 and by The University of North Carolina in 1929. During the summers of 1916, 1922, and 1923, he studied at Columbia University. From Wake Forest he also received the honorary doctor of laws degree in 1949.

On 13 July 1918 Huggins married Katherine Elizabeth (Katiebet) Morris, the daughter of Mr. and Mrs. E. W. Morris; they had two daughters, Minnie Morris and Katherine Elizabeth (Mrs. Paul V. Beam). Shortly after his marriage he left for France to serve in the 324th Machine Gun Company, 81st Division, for the remainder of World War I. He was one of twelve men chosen from his division to attend the Sorbonne in Paris for five months.

Before his military service, Huggins had been the principal of the Washington, N.C., High School (1912–13); a teacher of Latin and Greek at Union University, Jackson, Tenn. (1913–15); superintendent of schools at Clayton (1915–17); and a teacher in the Durham High School (1917–18). After returning from France, he was the superintendent of schools in Scotland Neck from 1919 to 1924. In the latter year, Huggins was named secretary of Christian Education for the Baptist State Convention of North Carolina, a position he held until 1929 when he became professor of education at Meredith College, Raleigh. In the fall of 1932, he was elected executive secretary-treasurer of the Convention—the first layman to hold this post since 1885.

Huggins was called to serve North Carolina Baptists at the peak of the depression. Disastrous fires at Wake Forest College and the lack of chapel facilities there were just a few of his burdens. The Convention had also assumed a large debt against Meredith College. Huggins carried his appeal from the mountains to the sea on behalf of Baptist educational institutions in the state. He proved to be an excellent financier, as well as a great harmonizer—he had a gift for bringing order out of chaos and did not permit divergent views to divide the members of his denomination. In 1932, mission gifts had dwindled to $199,330; total receipts, including those from the Cooperative Program, amounted to only $480,484. Upon his retirement in the fall of 1958, receipts from the Cooperative Program and mission gifts from the churches totaled $5,912,101, the number of churches had increased from 2,374 to 3,307, and membership had risen 101 percent—from 433,036 to 831,272. There were notable gains in Sunday school enrollment, Training Union and Womans Missionary Union memberships, and Baptist activities as a whole throughout the state.

Other significant accomplishments during Huggins's tenure included the addition of a new wing to the Baptist Hospital and the establishment of the North Carolina Baptist Homes for the Aging. The Baptist State Convention founded Fruitland Baptist Institute and created summer assemblies at Fruitland and Caswell. It also accepted the offer from the Z. Smith Reynolds Foundation to move Wake Forest College to Winston-Salem. Although these achievements might have occurred under other leadership, Huggins's interest and projection of new programs during his twenty-seven-year tenure were instrumental in their success. "Mr. Baptist," as he was known, served longer than any of the twenty-four men who had preceded him since the founding of the Baptist State Convention in 1830.

Huggins was the author of several books and pamphlets—among them, North Carolina for Christ; Baptists Working Together; Fellowship in World Service; Our Worship and Witness; Baptists Encircling the World through Their Churches; High School Libraries ; and Baptists Working towards a World Program. His most important work, A History of North Carolina Baptists, 1727–1932, was written during his retirement and published in 1967.