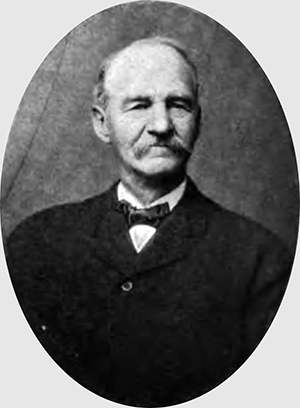 Orlando Hubbs, sheriff of Craven County and congressman, was born on a farm in Commack, N.Y., the son of Platt Ralph and Deborah Reeve Hubbs. His family had lived on Long Island for four generations, and he was the great-grandson of a Revolutionary War veteran. Hubbs attended local public schools and Commack Academy. At age sixteen he left school to learn the trade of carriage and wagon building; later he worked as a ship carpenter in Brooklyn.

In 1865, Hubbs moved with his wife to New Bern. According to family tradition, he came to North Carolina at the request of his brother Ethelbert, a Union veteran who had just settled in the state. Active in a mercantile business, Hubbs became involved in local politics, winning election to the first of five terms as sheriff of Craven County in 1870. No doubt his political base in Craven was strengthened by the activities of his brother, who was for a time editor of the New Bern Daily Times and held the important patronage post of New Bern postmaster from 1874 to 1882. By 1880 Orlando was chairman of the Republican executive committee for the second congressional district and a member of the party's state executive committee.

Hubbs was nominated for Congress in 1880 at a Republican convention marred by disorder and factionalism. Some Republicans refused to accept the result of the convention, and for several months there was considerable strife in the party as former Congressman Curtis H. Brogden campaigned as an anti-Hubbs candidate. The open division among Republicans ended after a Democratic candidate, William H. Kitchin, entered the race. Brogden withdrew, and Hubbs was easily elected in a district that was normally Republican. One of four "carpetbaggers" in the Forty-seventh Congress, Hubbs worked quietly to advance local interests and win patronage for political friends.

He sought reelection in 1882 but was frustrated by disarray within his party. The district convention broke up in confusion, with Hubbs and black attorney James E. O'Hara each claiming to be the true nominee. After weeks of bitter feuding with O'Hara, Hubbs dropped out of the race shortly before election day, noting that a continuing schism would only hurt the Republican party in other races. Later Hubbs unsuccessfully sought appointment as a U.S. marshal. In the 1884 election he held the purely honorary position of presidential elector for the losing Blaine-Logan ticket.

In 1886 and 1888, Hubbs ran for register of deeds in Craven County on a coalition ticket supported by one wing of the local Republican party and by Craven's perennially weak Democratic party. Each time he lost. After serious business reverses, he returned to his native New York in 1890 where he engaged in farming. Beginning in 1903, he served six consecutive terms in the New York Assembly and won a state senate seat in 1908.

Hubbs was married twice, first to Amelia H. Wheeler, and then, upon her death, to her sister Bertha C. Wheeler. Only one of his three children lived to maturity. Hubbs was a teetotaler and an active member of the Methodist church. He died at age ninety and was buried in his hometown of Commack, N.Y.