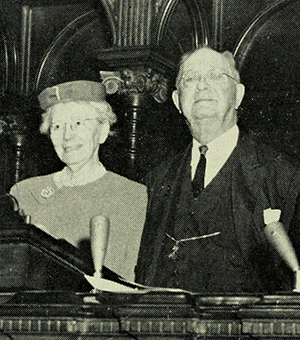 Gurney Pope Hood, banker, legislator, commissioner of banks, and church and fraternal leader, was born in Grantham Township, Wayne County, the son of Solomon Pope and Betsey Rhodes Hood. His ancestors were among the early settlers of his native region. He attended a one-teacher public school for nine years and a graded school in Goldsboro for one year, then read law for two and a half years under Nathan O'Berry. Although licensed in 1908, he never practiced law.

As a young man Hood was a Western Union messenger in Goldsboro, learned telegraphy, studied at night in business school, and became a telegraph operator, billing clerk, and bookkeeper for the Bank of Wayne. Deciding to make a career in banking, he served as an officer from 1913 to 1923 in banks in Whitakers, Morehead City, Tarboro, and Elizabeth City. In 1923, with his brother, he organized and was president of the Hood System of Industrial Banks.

In his first public office, Hood was alderman of Goldsboro from 1911 to 1913. Shortly after moving to Morehead City he became mayor, serving from 1917 to 1919. Returning to his industrial banking business in Goldsboro, he was elected in 1929 and reelected in 1931 to the North Carolina House of Representatives from Wayne County. In the General Assembly Hood was a member of the finance committee of both sessions, chairman of the subcommittee that wrote the Local Government Act, and a member of the subcommittee that drafted the Revenue Bill of 1931. As a member of the banking committee, he was active in banking legislation and supported the controversial Seawell Bill to remove the banking department from the Corporation Commission and make it a separate department, and to create the office of banking commissioner, one of Governor O. Max Gardner's legislative goals. Named commissioner of banks, Hood took office on 27 May 1931, the date the General Assembly adjourned, and served until 14 Apr. 1951, when he was succeeded by William W. Jones. His tenure encompassed the harsh days of the Great Depression and witnessed the failure of many financial institutions. Hood supported bank education, strengthened bank supervision, and was a leader in the restoration of the banking system after the Banking Holiday of 1933. In 1938 he was elected president of the National Association of Supervisors of State Banks. While banking commissioner, he was chairman of a committee of state employees other than teachers that drafted the State Retirement Act.

After leaving office, Hood organized and was president of the Hood System Industrial Bank in Raleigh until 1956. That year he was an unsuccessful candidate for the Democratic nomination for lieutenant governor.

A longtime leader in the Methodist church, Hood was honored for his service by the North Carolina Methodist Conference in 1961. He was vice-president of the North Carolina Council of Churches and a member of the board of directors of the National Conference of Christians and Jews. Among other associations, he was state councillor and national councillor of the Junior Order of United American Mechanics, and a member of the Masonic order, Odd Fellows, and Woodmen of the World. Hood was also a trustee of Louisburg College and of Shaw University.

On 16 June 1915 he married Marion Lee Stevens of Goldsboro. They had three children: Robin Pope, Samuel Stevens, and Lee Rawlings. At age seventy-seven Hood died of a stroke in Raleigh and was buried in Willow Dale Cemetery, Goldsboro.

"Pictured above are those particiapting in the presentation of citation to Mr. Gurney P. Hood...." Photograph. Journal of the North Carolina Annual Conference of the Methodist Church. [North Carolina: The Conference?]. 1961. 242. https://archive.org/stream/journalofnorthca1961meth#page/242/mode/2up