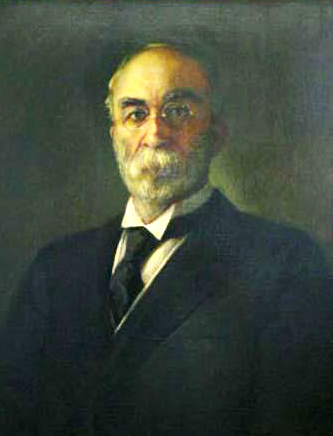 William Alexander Hoke, lawyer, legislator, and North Carolina chief justice, was born in Lincolnton of German and Scotch-Irish ancestry, the only son among the three children of John Franklin and Catherine Wilson Alexander Hoke. Alexander County was named for his maternal grandfather, William Julius Alexander. His father, a veteran of the Mexican War, was appointed adjutant general of North Carolina by Governor John W. Ellis in 1861 and later, as colonel, commanded the Thirteenth and, subsequently, Twenty-third North Carolina regiments of the Confederate Army.

Educated at the Lincolnton Male Academy, young Hoke grew to manhood during the years of the Civil War and Reconstruction. Having studied law under Chief Justice Richmond M. Pearson at Richmond Hill, he was admitted to the bar on 25 Oct. 1872. After practicing for eight years in Shelby, he returned to Lincolnton and formed a law partnership with his father, which continued until the latter's death in 1888. In 1889 he represented Lincoln County in the state legislature. Elected to the bench in 1890, Judge Hoke served in the Superior Court until 1904, when he was elected an associate justice of the North Carolina Supreme Court. Reelected in 1912 and 1920, he was appointed chief justice on 2 June 1924, succeeding the late Walter Clark. He was elected to the same post in November, but resigned on 16 Mar. 1925 because of ill health, assuming the status of an emergency judge until his death. His remains were taken from Raleigh to Lincolnton and buried in the graveyard of St. Luke's Episcopal Church. He had been a lifelong member of the Episcopal church.

Familiarly known as "Alex," Hoke, a staunch Democrat, was "in his day the most beloved North Carolinian," according to Archibald Henderson. Walter P. Stacy, his friend and colleague on the high court, described Hoke as a "superb lawyer," "splendid judge," and "noble spirit," standing "second to none in their [the people's] esteem and affection." Stacy further remarked: "His striking appearance and military bearing at once arrested attention and commanded respect. He was one of North Carolina's truly great men; great in mind and heart; great in character and achievement; great in breadth and quality of his sympathies."

The judicial opinions of Justice Hoke appear in fifty-three volumes of the Supreme Court Reports (#137–#189, inclusive) and deal with a wide range of subjects. In particular, several Supreme Court decisions prepared by Hoke show his mastery of the law of real property. In Hicks v. Manufacturing Co. (138 N.C.), one of the outstanding cases to come before the court during his tenure, Hoke wrote the decision that settled questions of assumption of risk and contributory negligence as affected by the negligence of a master or employer. He also wrote significant decisions concerning other matters of civil law, such as contracts, wills, conveyances, notes, and various suits in equity. His opinions in criminal cases reflected the right of every citizen to a fair and impartial trial.

Hoke apparently regarded the high point of his life to have been his role as chairman of the commission to provide a suitable statue of his friend, Governor and later Senator Zebulon Baird Vance, for the Hall of Fame in the capitol in Washington, D.C., where he delivered the address of presentation on 22 June 1916. Hoke was awarded the honorary doctor of laws degree by The University of North Carolina in 1909 and by Davidson College. From 4 July 1902 until his death he belonged to the Society of the Cincinnati, as a direct descendant of Lieutenant William Lee Alexander (Fourth North Carolina Continental Infantry), for whom, together with his maternal grandfather, Colonel William Julius Alexander, he presumably was named.

On 16 Dec. 1897 Hoke married Mary McBee of Lincolnton, who predeceased him. Their only child, Mary, survived both parents and later married Edward Slaughter of Charlottesville, Va.