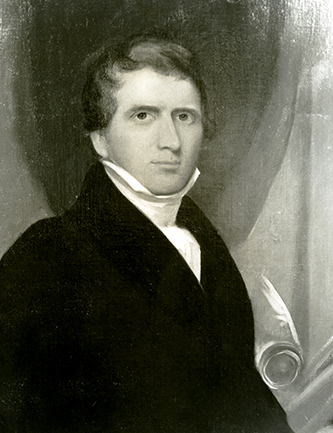 Gavin Hogg, lawyer, was born in the town of Wick, Caithness, Scotland. He came to the United States with his parents, James and Mary Finlayson Hogg, in about 1797. After arriving in Wilmington, the family moved to Hillsborough and later settled in Chapel Hill. Hogg attended The University of North Carolina, where he was a member of the Dialectic Society; he was graduated in 1807, then spent a year as a tutor at the university. While teaching in the Atkinson family in Dinwiddie County, Va., he read law.

After receiving his license, Hogg went to Windsor in Bertie County to practice law. It was reported by his contemporaries that, when he arrived in town, he drove up to a tavern in a single-stick gig after a long and fatiguing day's drive. He told the landlord that he had no money or local acquaintances, but showed him his license and said he intended to practice law. In asking for room and board, he noted that he would be unable to pay if he did not find work. The landlord, impressed by his candor, welcomed him cordially and gave him a place to stay while he became established. In this way he began his lifework.

As a Federalist, Hogg strongly opposed the War of 1812 and expressed his views with vigor. According to Pulaski Cowper, "public sentiment was fiercely arrayed against him, and so excited and defiant had it become, that his life was threatened, and he defied, singly and alone, a mob in the streets of Windsor, and stationed on his front porch with gun in hand, threatened death to the first who should invade his domain." But despite his opposition to the war, the patriotic Hogg raised a company of soldiers in Bertie County and, as their captain, participated in the Battle of Craney Island near Norfolk, Va. After his return from the war, he enjoyed great popularity among the very people who had wanted to lynch him and his legal services were eagerly sought. On one docket, he was attorney for 400 out of 423 cases.

Later in life Hogg became a Jacksonian Democrat. Sometime after the war, he moved to Raleigh and bought a number of lots in the vicinity of the capitol. The Archives and History/State Library building is located on property where the Hogg home stood for over a hundred years; the Supreme Court building is on a lot formerly owned jointly by Hogg and his close friend, George Mordecai.

On 22 May 1822, Hogg married Mary Ann Bayard Johnson of Stratford, Conn. She was the great-granddaughter of Samuel Johnson, first president of Kings College (afterwards Columbia University), and the granddaughter of William Samuel Johnson, second president of the same college and a signer of the United States Constitution for Connecticut. Hogg and his wife had several children who died in infancy and one son, Thomas Devereux Hogg, a longtime resident of Raleigh. Upon her death, Hogg married Sarah Leigh Haywood, the widow of James Gray Blount, but their marriage was of short duration due to his death at age forty-seven. The second Mrs. Hogg raised her orphaned stepson with enduring love.

Though originally a Presbyterian through his parents, Hogg became a member of the Episcopal church. He was a devoted friend of Bishop John Stark Ravenscroft, who spent the last months of his life at the Hogg residence where he died on 5 Mar. 1830. Hogg, with a small group of influential friends, was appointed in 1826 to make plans for erecting the first (wooden) structure for Christ Church, Raleigh. He was a delegate to the diocesan convention for four years (1825–28), and to the General Convention for two years (1829, 1832).

Pulaski Cowper, in praising Hogg as a fine criminal lawyer with a large and lucrative practice, wrote: "He was bold, aggressive and determined. He would in strict conscience, prosecute or defend to the full limit, confining himself strictly and solely to the evidence detailed; no inducement could alter or swerve his convictions. In his speeches to the jury he would frequently ask the court to stop him if he transcended the limits not warranted by the evidence presented. He was a fine advocate, and argued his points of law and evidence clearly, forcibly and intrepidly. He was one of the most positive and determined men the East ever had. He never gave a threat or took one. Courteous, respectful, and affable, yet dignified, deferential, though of easy approach."

Hogg was appointed by the General Assembly to prepare a codification of the statute law, but ill health forced him to resign the commission. As his health declined further, he relinquished his law practice in 1834. He died in New York while seeking medical advice. Due to the fame and stature of the man, Grace Episcopal Church in New York designated its famous sexton, Sexton Brown, to accompany the body back to North Carolina. Hogg was buried in the old Raleigh City Cemetery. Later his remains and those of his two wives and infant children were moved to Oakwood Cemetery. A portrait of Hogg hangs in the library at Hayes, near Edenton, the home of his good friend, James Cathcart Johnson.