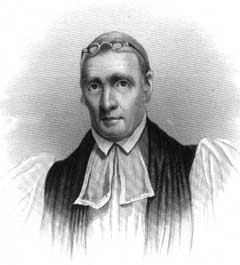 John Stark Ravenscroft, first bishop of the Protestant Episcopal church in North Carolina and twentieth in succession in the American episcopate, was born on his parents' plantation near Blandford, Prince George County, Va. His father, John Ravenscroft, a physician and planter, was of English and Scottish descent. His mother, Lillias Miller, was the daughter of Hugh Miller, a Scot who had settled in the same county. Dr. and Mrs. Ravenscroft were cousins, being great-grandson and granddaughter of Colonel Robert Bolling.

When John Stark was less than a year old, the family moved to Scotland, where young Ravenscroft received his early education. His father died in 1788, and the youth returned to Virginia to secure the remnants of the family property there. He entered William and Mary College, where he studied law under George Wythe and St. George Tucker. His youth, ample means, and freedom from supervision soon identified him with the undisciplined element of the college, by whom he was known as "Mad Jack" for his "vehemence of temper, speech and manner."

His marriage in 1792 to Anne Spottswood Burwell, daughter of Lewis Burwell, a young woman of beauty of person and strength of character, effectively changed the course of his life. Gambling and horse racing were laid aside, and the young Ravenscrofts settled on a plantation in Lunenburg County as respected members of the community. Ravenscroft was still indifferent to religion, however; it was not until eighteen years later that he became concerned with his soul's condition. He joined a congregation of Republican Methodists and served as their lay reader. Doubt as to the validity of this denomination's sacraments led him to the Episcopal church, and it was not long before he determined to join its clergy. Prepared by the Right Reverend Richard Channing Moore, bishop of Virginia, Ravenscroft was ordained deacon on 25 Apr. 1817 and eleven days later was made priest. He was rector of St. James's Church, Boydton, Va., from 1817 to 1823. Declining invitations to more advantageous parishes, he was about to become Bishop Moore's assistant at Monumental Memorial Church, Richmond, when the newly formed Diocese of North Carolina chose him as its first bishop. He was consecrated during the session of the General Convention in St. Paul's Church, Philadelphia, on 22 May 1823. 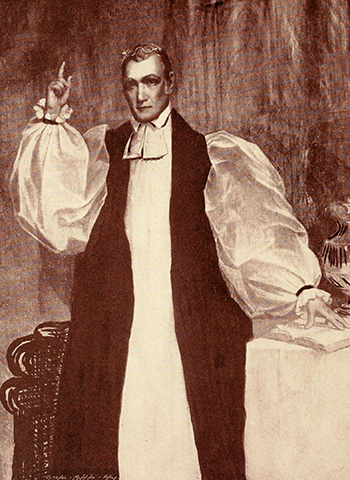 Having suffered financial reverses, the new bishop was obliged to augment his episcopal salary of $750 a year by becoming rector of Christ Church, Raleigh, giving six months of the year to each office. A vigilant and energetic shepherd of his flock, he traveled from end to end of his diocese, nurturing the small congregations and founding new ones. At the time of his death the number of congregations had more than doubled. During his entire ministry, he never missed a General Convention of the church nor a convention of his diocese. His constant traveling took its toll; in 1828 his health forced him to give up the Raleigh parish and take the smaller congregation at Williamsboro under his charge. In the summer of 1829, in response to "a very pressing invitation from the Episcopal Congregations in the State of Tennessee, to visit them, for the purpose of performing Episcopal duties," Ravenscroft undertook the difficult trip from his home in Williamsboro to Tennessee. On 1 July he presided over the convention of clergy and laity that organized the Diocese of Tennessee. Ravenscroft noted in his journal that he found the people of Tennessee to be "orderly and civil in their deportment, and certainly more civilized and intelligent in their appearance and conversation, than the same class of men in Virginia and North Carolina."

Speaking of Ravenscroft as a preacher, W. M. Green, one of the bishop's clergy, wrote: "As a Preacher he was justly entitled to be called evangelical in the proper and unabused sense of that term." Concerning Ravenscroft's churchmanship, Green said: "Bishop Ravenscroft was what the world is pleased to call a 'High-Churchman,' but was, in no sense, a Party-man." He was "fearless" in proclaiming the church's "Apostolic and authoritative character."

His wife died in 1814, and in 1818 he married Sarah Buford, of Lunenburg County, Va. Having no children of his own, he had adopted several of the young Hepburn boys, orphans of a friend in Lunenburg County. Two are mentioned in his will, and it is thought that one or more in addition were members of his household. After the second Mrs. Ravenscroft's death in 1829, the bishop determined to move to Fayetteville, but on his way there he died in Raleigh at the home of his friend Gavin Hogg. He was buried under the chancel of Christ Church.

Over six feet tall, erect, and commanding in presence, with a deep, strong voice and a stern and sometimes harsh demeanor, Ravenscroft preached a strict, unbending doctrine. He laid the foundations for a church that bore the earmarks of his work for more than a hundred years after his death. During his brief tenure, the church in North Carolina grew steadily in size and strength. Bishop Ravenscroft received S.T.D. and D.D. degrees from Columbia College, N.Y., and The University of North Carolina. A striking portrait of him, painted by Jacob Eicholtz in Philadelphia in 1829, hangs in the parlor of St. Mary's College, Raleigh.

Eicholtz, Jacob. "John Stark Ravenscroft first Bishop of North Carolina." Haywood, Marshall De Lancey. Lives of the bishops of North Carolina from the establishment of the episcopate in that state down to the division of the diocese. Raleigh, N.C. : Alfred Williams & Company. 1910. https://archive.org/details/livesofbishopsof00hayw (accessed January 10, 2013).