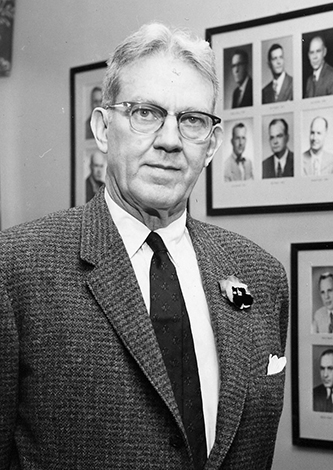 Julian Deryl Hart, surgeon and university president, was born in Prattsburg, Ga., the son of John Deryl, a farmer, and Fannie Walter Matthews Hart, a descendant of Sir Anthony Drane, nephew of the second Lord Baltimore. Brought up on a plantation of several hundred acres in Taylor County, Ga., Hart attended public schools in Buena Vista and then matriculated at Emory University, where he distinguished himself in mathematics and oratory, compiling the best record in math over four years of any student at the university. During his senior year, without telling his parents, he determined to become a doctor, although he remained at Emory beyond graduation in 1916 to take an M.A. degree in mathematics in 1917. Admitted to the Johns Hopkins University School of Medicine on the strength of a recommendation from his chemistry professor, for whom he supervised the premedical chemistry laboratory, he made his highest clinical grade in medicine but was most attracted to surgery. After receiving the M.D. degree in 1921, Hart continued at Johns Hopkins as intern in surgery (1921–22), assistant in pathology (1922–23), instructor in surgery (1923–29), assistant resident in surgery and surgical pathology (1923–27), resident surgeon (1927–29), and associate surgeon (1929–30). While a resident he wrote Surgery of the Hand, a text in the Practice of Surgery series edited by Dean Lewis.

Hart's southern background and long period of preparation at Johns Hopkins were prominent among the considerations that led Dr. Wilburt C. Davison in 1928 to offer him the position of professor of surgery and chairman of the department in the Duke University School of Medicine and Hospital, then under construction. From 1930, when he arrived in Durham to assume these duties, to 1960, when he retired from the medical faculty to become president of Duke University, Hart commented that he was an enthusiast for nothing else.

Because the Duke medical school was in the process of building a national reputation, his career had a clinical rather than a research orientation; its primary products were grateful patients and well-trained students, a number of whom later headed surgery departments. With Dr. Frederick M. Hanes and the cooperation of other members of the clinical faculty, Hart led in the development of the private diagnostic clinics at Duke. His pioneering work on the use of ultraviolet radiation as a means of combating airborne infections in the operating room won national acclaim in the late 1930s and early 1940s. In 1949, he and Dr. James Moody claimed national attention for their work on changing the male-female ratio in litters of rats. Relating their results to human experience, they suggested that it made a difference, in terms of sex determination, how early in the period of fertility an egg was fertilized. For many years after this work was published, Hart served—often informally—as a counselor to childless couples or couples desiring a child of a certain sex. His other publications reflect a broad clinical practice, with important contributions to the surgical treatment of peptic ulcers, spinal fluid drainage, the role of anesthesia in lowering surgical morbidity and mortality, and tidal irrigation of empyema in the chest.

In April 1960, Hart was asked to assume the duties of president pro tem of Duke University. Subsequently he was appointed president, retroactive to that date. Hart brought to the university, then in a period of administrative turmoil, a concept of leadership defined by the need for teamwork. During his presidency, the relationships among trustees, administrators, and faculty were reorganized to eliminate sources of conflict and friction. Always active in the planning of additions to the physical plant of the hospital and medical school, Hart presided over major expansions of the university plant as well. Under his leadership, faculty salaries were raised substantially and the number of endowed, distinguished professorships doubled. He retired from the presidency in 1963.

Hart married Mary Elizabeth Johnson of Raleigh in 1932. They had six children: Elizabeth Hicks Hart King, Julia Drane Hart Warner, Julian Deryl Hart, Jr., John Martin Hicks Hart, William Johnson Hart, and Margaret Louise Hart Harrison. Hart was a Democrat and a member of Duke University Methodist Church. A portrait of him hangs in the Duke University School of Medicine. His collected works are available in the Medical Center Library, and his personal and professional papers are in the university archives.