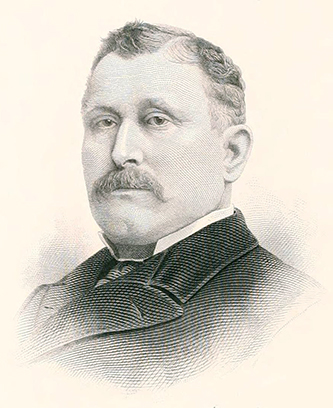 James Montraville Moody, lawyer and congressman, was born in Cherokee County. He possibly was the son of Henry L. and Elizabeth Moody, who are listed in the 1860 census of Haywood County as the parents of "Monterville B.," ten months old and born in Tennessee, as were his parents and a brother. Given the carelessness of many census takers and the unusual given name, the latter may be the subject of this sketch. It is recorded that when James Montraville was quite young, his parents acquired a farm on Jonathan Creek in Haywood County and moved there. He attended whatever schools in the area were available, then completed a course of study at the Waynesville Academy. Afterwards he attended a collegiate institute at Candler in Buncombe County.

Returning to Waynesville, Moody studied law for about five years and was admitted to the bar in 1881. In 1885 he was elected mayor of Waynesville, and in 1886 he became solicitor of the Twelfth Judicial District. In 1892, as a Republican, he was an unsuccessful candidate for lieutenant governor. Two years later he was elected to the North Carolina Senate and served for one term.

At the beginning of the Spanish-American War in 1898, Moody became one of the earliest volunteers. With the rank of major, he was made chief commissary of the U.S. Volunteers and served on the staff of Major General J. Warren Keifer, commander of the First Division of the Seventh Army Corps. After the war he returned to Waynesville to resume his legal career and soon had an extensive practice. Nominated as a Republican candidate for Congress in 1900, he was elected and served from 1901 to 1903. He was nominated in 1902 for a second term but was defeated by a mere 183 votes. Moody contested the election but died before the matter could be resolved. Returning home in January 1903 because of illness from pneumonia, he died just a month before his term expired and a week before his forty-fifth birthday.

Moody married Margaret E. Hawkins, and they were the parents of six children: James M., Jr., Jessie, Mary, Elizabeth, Keifer, and Margaret. He was buried in Green Hill Cemetery, Waynesville.

Report of the Fifth Annual Meeting of the North Carolina Bar Association (1903).