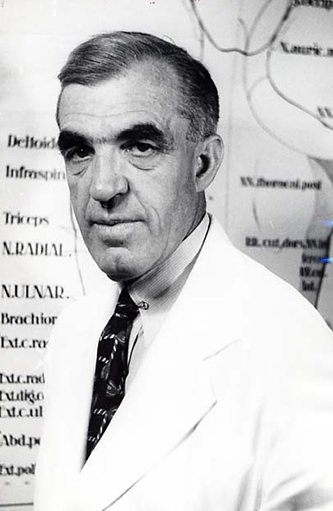 Frederick Moir Hanes, physician, educator, and researcher, was born in Salem, the son of John Wesley and Anna Hodgin Hanes. He was graduated from The University of North Carolina in 1903, received the M.A. degree from Harvard the following year, and was awarded the M.D. degree from Johns Hopkins in 1908. His first position was as assistant professor of pathology at Columbia University when he also served as a pathologist at Presbyterian Hospital in New York City. In 1912 he began a year's work with the Rockefeller Institute where he investigated fat metabolism digestion, motility of cancer cells, and techniques of chick and tissue embryo culture. Returning to Winston-Salem, he began the practice of internal medicine.

Shortly before World War I, Hanes was professor of therapeutics at the Medical College of Virginia. With the coming of war he became a lieutenant colonel, serving as an assistant neurologist at Queen's Square Hospital in London and later in France as commanding officer at Base Hospital 65.

After the war, Hanes resumed his practice in Winston-Salem. In 1933 he became head of the Department of Medicine at Duke University, Durham, where he also taught and conducted research in pathology and neurology. The author of numerous articles in medical journals, Hanes was named Florence McAllister Professor of Medicine and a Fellow in the American College of Physicians; he held memberships in the American Association of Physicians and in the Clinical and Climatological Association. In addition to his medical interests, he was a founding member of Phi Beta Kappa Associates and served as president (1928–32) and chairman of the board of directors of the Security Life and Trust Company in Winston-Salem. He was a lover of art, a bibliophile, a horticulturist, and an admirer of Samuel Johnson's works.

A Methodist, Hanes was married to Elizabeth Peck; they had no children. He was buried in Salem Cemetery, Winston-Salem.