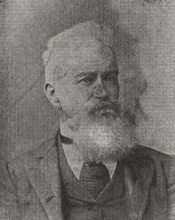 Benjamin Franklin Grady, educator, soldier, congressman, and farmer, was born in Albertson Township, Duplin County, the oldest son of Alexander Outlaw and Anne Sloan Grady. His Grady forebears were in North Carolina by 30 June 1718, when his progenitor William Grady (or Graddy) received fifty acres on Deep Creek in Bertie County from James Rutland. The name is said to have been pronounced Graddy in Duplin County, to which William's son John moved in 1739 to land on the fork of Burncoat Creek and Northeast River. He married Mary, daughter of William Whitfield. Two of their sons, John and Alexander, fought in the Battle of Moore's Creek Bridge in 1776; John was killed and a monument placed there to his memory. After the war, Alexander and his wife Nancy Thomas lived on the Grady farm. Their son Henry married Elizabeth Outlaw, daughter of James Outlaw, on 6 Jan. 1799. They were the paternal grandparents of Benjamin Franklin Grady. His mother was the daughter of Gibson and Rachel Bryan Sloan. Through his Bryan grandmother, Benjamin was connected with William Jennings Bryan of Nebraska as well as with the North Carolina Bryans, one of whom was Colonel Needham Bryan who represented Johnston County in the provincial congresses of 1774 and 1775. The family is descended from a daughter of Lord Needham (the family name of the Earls of Kilmorey) of Ireland who married a Bryan and immigrated to America.

Grady attended public and private schools and was prepared for college by the Reverend James M. Sprunt at Grove Academy, Kenansville. He was one of the student orators at his graduation from The University of North Carolina on 4 June 1857. After earning the A.B. degree with highest honors, he returned to Grove Academy to teach. In 1859, he became professor of mathematics and natural sciences at Austin College, then located at Huntsville, Tex., where he taught until the college suspended operations at the outbreak of the Civil War.

Illness from typhoid fever prevented his enlisting until the spring of 1862, when he joined a Texas cavalry unit that became Company K in the Twenty-fifth Regiment and was soon dismounted. Throughout the war he served with the rank of orderly sergeant, twice refusing a captaincy. The entire command was captured at Arkansas Post on 11 Jan. 1863 and confined at Camp Butler, near Springfield, Ill., for about three months before being exchanged in April. Afterwards, Grady was sent to Tullahoma, Tenn., to join General Bragg's army; he served until the close of the war in Granbury's Brigade, Cleburne's Division, Hardee's Corps. Except at Nashville and Bentonville, he participated in all battles and skirmishes in which his brigade was engaged. Toward the end of the war, he once more became ill with typhoid fever and, from 19 March to 2 May 1865, was in Peace Institute, Raleigh, then being used as a hospital.

After the war, Grady returned to his home community, called Chocolate, in Duplin County, and soon resumed his life's work of teaching. He organized a school at Moseley Hall (now LaGrange) where he taught for two years. In 1868, he and Professor Murdock McLeod founded the Clinton Male Academy in Clinton, Sampson County, where he taught until 1875 when failing health forced him to abandon teaching for farming. A few years later, however, he returned to his old residence in Duplin County and for several years conducted, in his home, a private school for young men who were unable to go to college. He also founded a Sunday school at old Sutton's Branch School House where he taught music, the Bible, classical literature, and the sciences. During this period he was appointed a justice of the peace.

Grady served as a trustee of The University of North Carolina during 1874–91. In 1881 he was elected superintendent of public instruction for Duplin County, a position he held for eight years. Twice elected on the Democratic ticket to the United States Congress, he represented the Third District from 4 Mar. 1891 to 3 Mar. 1895. He then moved to Turkey in Sampson County where he and his son Henry established a school, the Turkey Academy. Around 1900, he moved to Clinton where he spent his last years studying and writing. He published pamphlets, letters, and two books dealing with the South and its struggle: The Case of the South Against the North (1899) and The South's Burden (1906). Earlier he had published An Agricultural Catechism (1867) as a textbook for the common schools.

Grady's first wife, Olivia Hamilton of Huntsville, Tex., died while he was a prisoner at Camp Butler, leaving one child, Franklin. His second wife, Mary Charlotte, daughter of Dr. Henry A. and Celestial Robinson Bizzell of Clinton, bore him nine children: Henry A., who became a superior court judge; Cleburne; James B.; Stephen S.; Benjamin; Louis D.; Lessie R.; Mary Eva; and Anna B. He died in Clinton and was buried in the Clinton Cemetery.

Benjamin Franklin Grady, The Case of the South Against the North (1899).

University of North Carolina Order of Exercises for Commencement, 4 June 1857 (1857).

Thank you for NCPedia, and

Thank you for NCPedia, and for this nice article about my Great-great Grandfather.

Also my Great-great Grandfather...I am cleaning out family things and dividing between my grandchildren. Great article