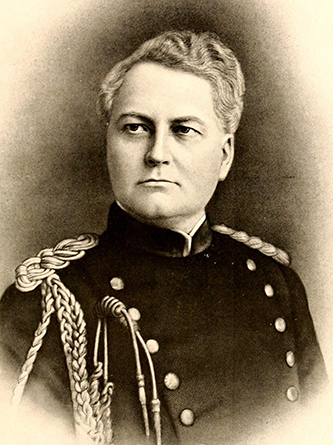 Henry Alexander Grady, teacher, lawyer, and judge, was born in Clinton, the son of Benjamin Franklin and Mary Charlotte Bizzell Grady. His ancestors came to America from Ireland, and one William Grady (or Graddy) settled in Bertie County about 1718. William's son, John, moved to Duplin County and settled on the Northeast River on a tract of land that is still in the family. The history of this area of the county, known as Chocolate, and the genealogy of the Grady, Outlaw, and other families with whom they intermarried, were the topics of a lengthy poetical narrative written by Henry Alexander.

Grady was born in his maternal grandfather's house in Clinton, where his father was conducting a preparatory school. Several years later his family returned to his father's old home in Duplin County, and young Grady was reared on the farm. At age nineteen he secured a teaching certificate from the superintendent of Duplin County schools and taught for two years. In 1892 he enrolled at The University of North Carolina, where he pursued a special course in mathematics and literature. In 1894 he went to Washington, D.C., as private secretary to his father, then a member of Congress. While in Washington, he enrolled in the law school at Georgetown University for one year and was elected president of his class. In 1895, he accepted a position with the U.S. Coast and Geodetic Survey and was sent to Alaska to assist in surveying and establishing the boundary between that territory and Canadian British Columbia, and in making astronomical observations.

In early 1896, Grady returned to North Carolina for a short rest. Afterward he went to New York City, where he studied law under his half brother, Franklin. Primarily for financial, and not philosophical, reasons, he was employed by a reform club and worked in the 1896 Free Silver Campaign. Later, he was principal clerk in the New York law office of John Sprunt Hill, of Duplin County and Durham, N.C. When the Spanish-American War broke out, Grady returned to Duplin County and organized a group of volunteers, but the war was over before they could be mustered into service. In 1898, he joined with his father in establishing an academy in the small Sampson County town of Turkey, where he taught for two years. In 1900, he reentered The University of North Carolina to take a summer law course under Judge James C. McRae. In the fall he sat for the bar examination by the state supreme court, passed, and received his license to practice. Returning to Clinton, he formed a law firm with Henry E. Faison, but the venture was short-lived due to Faison's failing health. At some time between 1904 and 1906, he established a law practice with his brother-in-law, Archibald McLean Graham, and remained with the firm until 1922.

Prominent in the public affairs of his county, Grady served as a member of the North Carolina Democratic State Executive Committee for twenty years (1902–22) and of the North Carolina National Guard from 1910 to 1912. He held the rank of colonel on the staff of Governor W. W. Kitchin. In 1902, he made an unsuccessful bid for the state house of representatives, losing primarily because Democrats were in the minority in Sampson County. Two years later, however, he was elected to the state senate. About 1917 he was elected mayor of Clinton and served until 1921.

Grady was initiated into the Masonic order in 1901, and in time held a large number of offices. In 1919, he was elected Grand Master of Masons in North Carolina and was later a member of the Committee on Masonic Jurisprudence, serving for a number of years as chairman. In 1918, at the request of the Grand Master, he attended a conference in Cedar Rapids, Iowa, where he was a member of the committee that drafted the constitution for the Masonic Service Association.

In 1922, Grady was elected a judge of the superior court and took office on 1 Jan. 1923. A popular judge, he easily won reelection in 1930 but declined to seek a third term in 1938, probably due in part to the death of his wife in 1935. After his retirement, he served as emergency judge for life. In 1952 and 1953, then over eighty years old, he held more sessions of superior court than any other judge in North Carolina.

About 1923, Judge Grady was elected Grand Dragon of the Ku Klux Klan in North Carolina, an organization then promoting law and order. A moderate, he endeavored to steer the organization away from extreme actions. He supported legislation banning the wearing of masks, both as a way to keep the Klan from getting into trouble and to keep it from being blamed for the acts of others. Following a split with the national leadership, primarily because it was felt that he was too restraining an influence, he resigned as Grand Dragon in 1927.

On and off the bench, Grady was a tireless worker. His favorite pastimes included carpentry and cabinetmaking, and he enjoyed building grandfather clocks. A fiddler of no mean accomplishment, he took pleasure in entertaining his friends and guests. His love of literature remained with him all his life, and his favorite authors were Tennyson and Burns. Grady was a poet himself, penning "Chocolate," "The Land of Never Come Back" (describing death to the young son of a friend), and "Immortality." He also enjoyed history and genealogy, and was an authority on several North Carolina families. He gathered and catalogued genealogical data from every available source. His exhaustive research is nowhere more evident than in his "Charge to the Grand Jury" in Duplin County in 1933; this work is a masterpiece of family and legal history and jurisprudence.

A noted storyteller, Grady often kept listeners entranced for hours. He was much in demand as a public speaker at bar meetings and at historical and other public gatherings. His numerous speeches, spiced with anecdotes, incidents, history, and philosophy, have been described as uplifting and thought provoking. Among them were "The Two Spaights of New Bern" (7 June 1923), "The Battle of Moore's Creek" (13 Apr. 1925), the address at the first Grady-Outlaw reunion (29 Aug. 1930), the address upon the presentation of a portrait of Superior Court Judge Chatham C. Lyon to Bladen County (29 Apr. 1935), and the address upon the presentation of a portrait of Albert T. Outlaw, former register of deeds, to Duplin County, in which Grady recited his inspirational poem, "Tell Him Now" (10 Apr. 1953)—all of which are preserved in the North Carolina Collection, University of North Carolina, Chapel Hill.

Judge Grady has been described by those who knew him as having the wisdom of Solomon. He is said to have had the "common touch," with a keen understanding of human nature and of the problems and lives of those with whom he came into contact. Always helpful to those who were sincere and earnest, he was capable of ascertaining falsehood and pretense and hated a lie. In the courtroom, he knew no fear, on occasion wielding a firearm to maintain order. He demanded justice and fairness, for which he had a passion, and is said to have managed the business of the court with firmness and expedition and to have presided with dignity and discretion.

On 23 Oct. 1901, Grady married Anne Elizabeth Graham, the only daughter of Dr. Daniel McLean and Elizabeth Ann Murphey Graham of Wallace. She was the cousin of Frank Porter Graham, president of The University of North Carolina and later a U.S. senator from North Carolina and United Nations ambassador. After their marriage, the Gradys lived in Clinton and became the parents of three daughters, all of whom died, and three sons, Henry A., Jr., an attorney in Clinton and New Bern; Franklin McLean, a physician in New Bern; and Graham Montrose, a career army officer.

Proceedings of the Grand Lodge of North Carolina (1919).

Thank you for NCPedia, and

Thank you for NCPedia, and for this nice article about my Great-grandfather!

Thank you fop this bit of

Henry A. Grady was my great

Henry A. Grady was my great uncle..his sister Eva Grady Smallbones was my grandmother. I met my great uncle a number of times and visited him in New Bern NC he had a lovely home on the river. Lived with his son and wife, Irene, they had three children. John, Brian and Reba Grady.