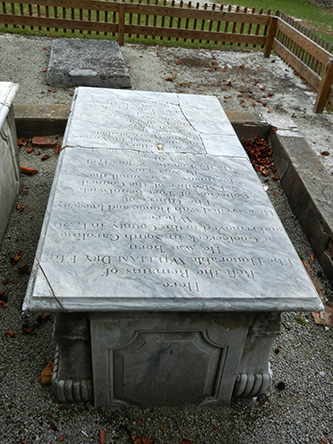 William Dry, III, Brunswick merchant, planter, and royal placeman, was born in Goose Creek, S.C. The progenitor of the Dry family in Carolina was Robert Dry who immigrated to South Carolina about 1680. His son, William Dry I, inherited the home plantation near Charles Town which he bequeathed to William Dry II. The marriage of the latter to the sister of Roger, Maurice, and Nathaniel Moore probably prompted him to join the Cape Fear enterprise initiated by the Moores in the 1720s. In 1736 he moved his family, including sixteen-year-old William Dry III, to Brunswick where the elder Dry was justice of the peace, militia captain, and prominent merchant until his death in 1740.

William Dry III, the revolutionary, stood ready to succeed his father as one of the leading citizens of the Cape Fear. Retaining the magistrate's office and militia command in the family, he first achieved provincial prominence as leader of the militia force that counterattacked and repulsed the Spanish raid on Brunswick in 1747. For his efforts he was eventually elevated to the rank of colonel. In 1754 the provincial assembly designated him one of the commissioners of Fort Johnston, which not only protected the Cape Fear but also much of Dry's property along the river from Brunswick to Wilmington. During the French and Indian War the assembly commissioned Dry to repair the fort, but he proved so dilatory that the war ended a year before the repairs were completed in 1764.

In the meantime Dry continued to serve the Cape Fear community as one of the commissioners of the roads in the southwest district of New Hanover County (1745–64) and as commissioner of pilotage for the Cape Fear River. In 1764 he was named one of the commissioners to determine the dividing line between Bladen and Brunswick counties. Eight years later he and John Rutherfurd, receiver general of the quitrents, joined representatives of South Carolina to survey an extension of the boundary between the colonies. Dry was also a communicant of the Anglican church, which he staunchly supported.

Amid these services to the colony Dry, at the rather late age of forty, evinced an interest in politics. In 1760 he became one of the charter aldermen of Wilmington and successfully stood for election to the provincial assembly from the town of Brunswick. After a brief and rather colorless career in the lower house, he was appointed to the council in 1763. When councillor John Swann died in 1761, Governor Arthur Dobbs wrote the Board of Trade to recommend Dry as a replacement. He characterized Dry as "a Gentleman of Great Worth and Fortune and zealous in Supporting his Majesty's Rights." Dry assumed his position on the council in the summer of 1764. 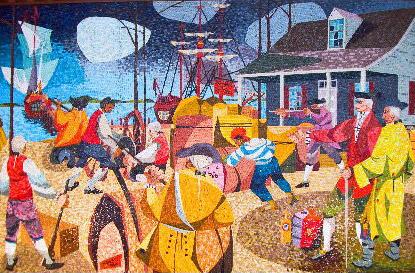 Dry's service to the king as councillor was antedated by his employment in the customs department as collector of the Port of Brunswick in 1761. This position brought him in conflict with the Cape Fear mobs during the Stamp Act crisis in 1765 and 1766, and those harrowing times seem to have constituted a turning point in his career. His circumstantial support of the Crown during the Stamp Act affair jeopardized his social and political standing in the colony. Thereafter, he worked assiduously to court popular favor. The transition proved relatively easy because Dry was fundamentally "a good-natured man" who made no pretense "to knowledge or understanding in anything" and lacked fixed political principles. By 1774, however, the collector had definitely emerged on the side of the popular majority when he and other councillors contradicted instructions from the Crown and exhortations from the governor by supporting assembly bills that altered the nature of the county and superior courts of the colony. The following year Dry detached himself completely from the royal cause, toasting to the success of American arms in New England and, according to a British partisan, talking "treason by the hour." In 1775 Governor Josiah Martin suspended Dry from his seat on the council, noting that Dry's unreserved support for the revolt in America probably "astonished even the foremost leaders of sedition" in the colony.

Despite Dry's protestations of support for the Americans, he did not prove to be a fervent patriot. When the legislature of the new state of North Carolina appointed him one of seven members of the Council of State, he declined to serve. No evidence exists to substantiate his active participation in the conflict with Great Britain. Basically he was a jovial planter who was more concerned with setting a fine table and entertaining guests than actively pursuing politics. Massachusetts journalist Josiah Quincy, Jr., found "Dry['s] is justly called the house of universal hospitality." Moreover, in 1776 the British literally brought the war to Dry's doorstep when they looted Brunswick and burned his elegant home, Bellfont (formerly Russellborough), which he had purchased from Governor William Tryon. Dry spent the remainder of his life on Blue Banks plantation, a 3,800-acre estate in Brunswick.

Dry married Mary Jane Rhett, maternal granddaughter of Nicholas Trott and paternal granddaughter of the notorious William Rhett of South Carolina, and "a lady of great fortune and merit" in her own right. The couple had two daughters: Rebecca, who married Thomas McGuire, attorney general of North Carolina before the American Revolution; and Sarah, who married Benjamin Smith, a future governor of North Carolina. A loving father, Dry was much aggrieved at the early death of Rebecca in 1776. He died at age sixty-one and was buried in St. Philip's churchyard in Brunswick where most of his immediate family also lie.

"Panel Marks Defeat of the Spanish at Brunswick Town" August 20, 2009.

Was William Dry the third,the

I have looked through a number of sources and do not see a reference to this so far.  Do you happen to have a specific reference that you have seen that we could look at?  If so, I would be glad to look further into this.  And if we find anything we will update the entry.

Thank you and best wishes,