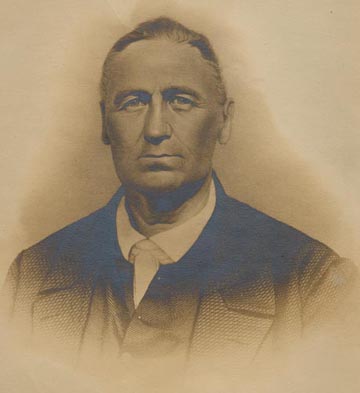 Peter Doub, Methodist circuit rider and professor of biblical literature, Trinity College, was born in Stokes County, the youngest of the nine children of John Doub, German immigrant, and Mary Eve Spainhauer, born of Swiss parents who had moved to Stokes County in 1763. His father engaged in farming and tanning. Both parents became adherents of the new sect of Methodism introduced in western North Carolina in 1780, and their home served as a regular meeting place of the circuit.

Home study was a part of the weekly activities of the Doub household; the only schooling that Peter ever received outside the home was provided in the old field schools at irregular intervals over a seven- or eight-year period, totaling perhaps a year and a half. Doub, who was given strict religious training from an early age, recorded that his first personal religious "experience" occurred at a camp meeting in 1802 when he was six; however, his conversion took place on 5 Oct. 1817 at a camp meeting in Davie County. Ten days later he joined the Methodist Episcopal church. At the fourth quarterly conference of the Yadkin circuit, he was recommended as a candidate for the ministry to the annual conference in Norfolk, Va., in 1818. His first assignment was to the Haw River circuit, with twenty-seven appointments. The next year he was sent to the Culpepper circuit in Virginia. In 1820 he was ordained as deacon and went to Bedford and Lynchburg. The following year he was back at the Haw River circuit. In 1822, the annual conference held at New Bern ordained him elder and sent him to the Raleigh circuit. In 1823 and 1824 he served the Granville circuit and in 1825, the Roanoke circuit; in 1826–29 he was superintendent of twenty-six churches in the Yadkin district. In 1830 he requested to be returned to the circuit and during the next eight years he served six circuits in North Carolina and two in Virginia.

Doub's career spanned more than a half century. He spent forty-two of those years traveling on the Methodist circuits and districts, four at stations, one as a temperance lecturer, and three as a professor. In all of this time, he was unassigned for only one year when he withdrew to regain his broken health. His life was characterized by a strict regimen of study. Much of his preaching was doctrinal as well as lengthy. In 1830 in Rockingham County, he preached one sermon for four hours and fifteen minutes. He engaged in disputes with the Calvinists defending the Arminian doctrine of free will and free grace, a belief so congruent with frontier life. One of his most significant accomplishments was in 1830, when he organized the Methodists in Greensboro to build the first church building of any denomination within the town—now the West Market Street United Methodist Church. In 1832 a school was opened across the street for the children of the members. This was the beginning of the movement that led to the establishment of Greensboro Female College (Greensboro College), chartered by the Methodist Conference on 28 Dec. 1838. In 1843, Doub was a delegate to the general conference in New York, out of which grew the separation of the southern Methodists from the general conference. As a delegate to the convention of the southern church in 1845, he suggested the name "Methodist Episcopal Church, South," which was adopted. In 1855 he was awarded the doctor of divinity degree by Normal College, soon to become Trinity College. After the age of seventy, a new career opened when he was invited to join the faculty of Trinity College as professor of biblical literature in 1867.

That Doub should end his career as a professor was a fitting climax to a life given to the Christian ministry and to education. The journey from the old field schools to a college professorship represented a lifetime of self-education and devotion to enhancing the quality of life of the early North Carolina communities. He died in Greensboro and was buried in the Methodist cemetery. In 1917 the remains of Doub and his wife were removed to Green Hill Cemetery in Greensboro.

On 19 Aug. 1821 Doub married Elizabeth Brantley of Chatham County; they had seven children. A portrait of him hangs in the library of Greensboro College. His handwritten journal and autobiography, together with personal letters, are in the Perkins Library of Duke University.