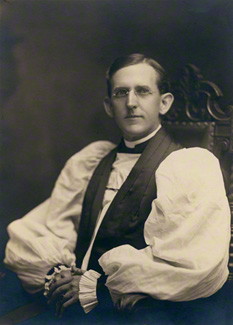 Thomas Campbell Darst, Episcopal bishop, the son of Major Thomas Welch Darst and Margaret Rebecca Glendy, his second wife, was born at Fancy Hill in Pulaski County, Va. Major Darst, who died when his son was seven, was of English and Huguenot ancestry; Mrs. Darst was Scotch-Irish. Both were Presbyterians, worshipping in a church also used by Episcopalians. Young Darst attended public school in Pulaski and, after his mother's death in 1891, continued his schooling in Salem, where he lived with his sister Gillie (Mrs. David Terry Martin). He was graduated from Roanoke College in 1899 after four years of study interrupted by a two-year stint in business in West Virginia and New Jersey.

Soon afterward Darst would fulfill his mother's wish that he become a clergyman; but it was to be in the Episcopal church, into which he had recently been confirmed. He entered the Episcopal Theological Seminary, Alexandria, Va. Ordained deacon by Bishop George W. Peterkin of West Virginia in 1902 and advanced to the priesthood by Bishop Coadjutor W. L. Gravatt the next year, he was successively assistant at Christ Church, Fairmount, W. Va. (1902–3) and rector at Upperville-Middleburg-Aldie, Va. (1903–5); St. Mark's, Richmond (1905–9); St. Paul's, Newport News (1909–14); and St. James's, Richmond (1914–15). As secretary of the General Convention of the Episcopal Church held at Richmond in 1907, he demonstrated his capacity for sustained and productive labor and devotion to duty.

Darst was elected Bishop of East Carolina on 7 Oct. 1914 and consecrated in St. James's Church, Wilmington, on 6 Jan. 1915. By personality and precept he soon won the hearts of his people and guided the diocese through the difficult and demanding years of world war, prosperity, and depression. There were organizational and procedural changes and statistical growth in the diocese, but he put them in perspective with his keynote that organization cannot take the place of the Spirit of God. An earnest and effective preacher, Bishop Darst stressed the importance of missions, taking special interest in those along the Intracoastal Waterway and at the military bases. The bishop was a trustee of Thompson Orphanage, Pineland, St. Mary's Junior College, St. Augustine's College, and The University of the South. He served his church as president of the Fourth Province, member of the Field Department, first chairman of the National Commission on Evangelism (1925–34), and originator and director of the Bishops' Crusade (1926–27). He suffered an illness in 1943, retired as diocesan in 1945 but continued his ministry, and died three years later. The funeral was held at St. James's and interment at Oakdale Cemetery, Wilmington.

Bishop Darst was honored with the D.D. degree by the Virginia Seminary, The University of the South, Roanoke College, The University of North Carolina, and Duke University. He was a member of Pi Kappa Alpha, the Masons, the Knights of Pythias, Kiwanis, and the Democratic party. He took a keen interest in the work of the Roanoke Island Historical Association and in the restoration at Bath.

Frederick A. Turner, Bishop Darst and East Carolina During the Last Twenty-Five Years (1939).