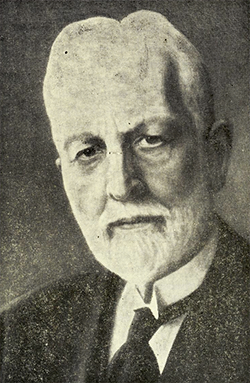 Daniel Branson Coltrane, banker, industrialist, religious and educational leader, and Confederate veteran, was born in Randolph County in a two-room log house near Ebenezer Methodist Church and Coltrane's Mill on Deep River, not far from Trinity and the Guilford County line. His father was Kelly Coltrane, a descendant of the first Coltrane (David) to come from Scotland to America; David settled in Edenton and married Mary Wallace. Kelly, one of the family members who called Randolph County home, married Mary Gossett in 1839.

Coltrane's first schooling was in a private home in the neighborhood. Later he attended school in a one-room school some two miles away, walking in good weather and riding in his father's wagon in bad. A typical school of that time, it was open during the winter months when there was no planting or harvesting to be done. When he was thirteen years of age, the family moved to a home in the community where Braxton Craven, president of Trinity College from 1859 to 1892, was both student and teacher.

His father's death in 1858, when Branson was sixteen, meant that his formal schooling was ended, for he became head of the family. His father was an industrious farmer, slave owner, and good provider; he left to his family a farm and a few slaves. His mother was a strong and courageous woman who carried on the duties and responsibilities of the farm and made a home for eight children.

At the age of nineteen, Coltrane began his service with the Confederate Army. His memoirs, written when he was ninety-three, reveal a young man of courage, strength, loyalty, and perception. Humorous circumstances balance accounts of the dangers encountered and the sorrow experienced in the loss of companions: very few members of the company starting with him in 1862 were mustered out with him in 1865.

Enlisting in 1861 in the Trinity Guards, an infantry company organized by Braxton Craven, Coltrane served in the forces of the South until the end of the war. After six months the company of Trinity Guards was disbanded. He then enlisted with a cavalry company organized by N. P. Rankin in Greensboro in 1862. He was with this company (Company I, Sixty-third Regiment, North Carolina Cavalry) for the rest of his service.

Following the war, Coltrane farmed as best he could with the resources left to the family that first year. In the fall of 1865, his brother, Dr. Wesley, who had moved to Cave Springs, Mo., in the 1850s, came home to visit his mother. His stories of opportunities in the West led Branson to leave for Missouri, where he worked in Arrow Rock, Miami, and Marshall. Another Confederate veteran taught him elementary photography, and he invested in a jewelry store; succeeding with both ventures, he with other investors established a bank. In Missouri, he married Ella Van Ice, who died in 1882. Of this marriage two children were born. Later Coltrane married Mariam Winslow, who died in 1915 in Concord; four children were born to them. One daughter, Ruth Louise, married Charles A. Cannon.

In 1886, Coltrane sold his interest in the Missouri bank and decided to settle elsewhere. He debated North Carolina and California, but visits to his mother brought about a decision to move to Concord. There he became one of the incorporators of a new bank, the Concord National Bank, which opened its doors on 5 July 1888. He was president of the bank from its opening until his death, and his son L. D. became cashier, remaining with the bank until his death in 1948.

In addition to his interest in the bank, Coltrane engaged also in textile manufacturing and other industries. He was president of the Kerr Bleaching and Finishing Works (1910 to 1937), the Norwood Manufacturing Company, Norwood, the Linn Mills Company, Landis, and the Poplar Tent Gin Company; he was vice-president of the Locke Cotton Mills.

His interest in the community was pronounced throughout his lifetime. Church responsibilities and service to others through the church had priority over everything else. Of his church affiliation he said, "I attribute my success, whatever that is, to my fidelity to my church." When he left North Carolina for Missouri in 1865, he took his church letter with him. One of the accomplishments that gave him great satisfaction was the consolidation of the publications of the Methodist Episcopal Church, South, beginning in 1901; he also helped to strengthen the North Carolina Christian Advocate. He was chairman of the board of publications for thirty-five years. In Concord he was chairman of the board of stewards of the Central Methodist Church for twenty-five years and a Sunday school teacher or superintendent for fifty-eight years.

Next to his church, education was Coltrane's special concern. When he moved to Concord in 1888, he was astonished to find that many depositors at the bank could not write their names; he had known only one person in Missouri who could not do so. He launched a drive for better schools in Concord and nurtured the new school system for sixteen years. When Governor Robert Glenn appointed him a trustee of the Stonewall Jackson Training School, he resigned from the Concord School Board. He was elected treasurer of the training school board and served in that capacity until his death.

Coltrane died in Concord at the age of ninety-four.