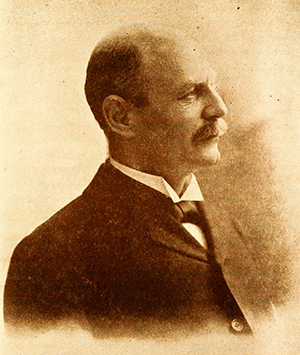 William Hyslop Sumner Burgwyn, lawyer, soldier, and banker, has been described as the most versatile person ever to have lived in Vance County. The son of Anna Greenough of Boston and Henry King Burgwyn, a wealthy planter, he was born at Jamaica Plains, a part of Boston, and spent his childhood at Thornbury Plantation on the Roanoke River, Northampton County.

Every educational facility was afforded him. He was taught by private tutors until 1854, when, at age nine, he became a pupil at Chestnut Hill School near Baltimore, Md. In 1857 he became a student at Horner's School in Oxford. He entered The University of North Carolina in 1860 as a freshman but left school in 1861 because of illness. Later that year he entered Hillsborough Military Academy as a cadet. Burgwyn was an excellent soldier, and by the fall of 1861 he was appointed drill master of the camp of instruction near Raleigh. His strict attention to every phase of military duty impressed his superior officers, and he was elected lieutenant of Company H, Thirty-fifth North Carolina Regiment. He participated in all the battles in which the Thirty-fifth North Carolina engaged and became captain of the company in 1863.

Burgwyn was assigned to duty as assistant adjutant general of Thomas L. Clingman's brigade in January 1864. He was severely wounded at the Battle of Cold Harbor on 1 June 1864. As soon as his wounds healed, he returned to duty, reaching his brigade in front of Richmond about the middle of September. He was wounded again on 30 Sept. 1864 in an assault on Fort Harrison. This time he was captured and taken to Fort Delaware, where he was kept a prisoner until March 1865. Through the intercession of Colonel William Norris of Baltimore, the Confederate States commissioner of exchange, Burgwyn was paroled, but he was not exchanged. 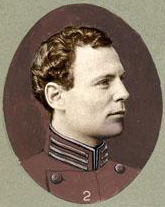 After the Civil War, Burgwyn returned to civilian life, but his military career was not at an end. While he was a lawyer in Baltimore, he offered his services to the governor of Maryland during the Baltimore and Ohio Railroad riot of July 1877. He was appointed lieutenant colonel of the Eighth Regiment. His excellent service caused him to be elected colonel of the Fifth Maryland Regiment, a celebrated military organization. Burgwyn also participated in the Spanish-American War. He was appointed colonel of the Second Regiment, North Carolina Volunteer Troops, in May 1898; the war was over, however, before he engaged in any fighting.

After the Civil War, Burgwyn entered The University of North Carolina as a sophomore and was graduated in June 1868 with first honors; he delivered the Latin salutatory address. He was a member of the Philanthropic Society of the university and a member of Zeta Psi Fraternity. He entered Harvard Law School in 1869 and was graduated in 1870. He then moved to Baltimore and was admitted to the Maryland bar. To broaden his education, he entered Washington Medical University of Baltimore in 1874. He received his diploma as a doctor of medicine in 1876 but never applied for a license to practice medicine.

Burgwyn returned to North Carolina in 1882 and located in Henderson. There he established the banking house of W. H. S. Burgwyn and Co., the first bank in Vance County. As a private bank, it was without any government permit or regulation other than an annual sworn statement of its assets to the tax lister. The Burgwyn Bank became a state bank, the Bank of Henderson, in 1884, and Burgwyn was its first president.

Burgwyn was generally connected with every noteworthy enterprise in Vance County and did everything in his power to promote the best interests of all in North Carolina. He established not only the bank in Henderson but also an electric light system, water works, and a tobacco factory. He served as president of the Henderson Female College from 1886 to 1891. He was appointed trustee of The University of North Carolina in 1883. In 1887 he was asked to represent North Carolina in the Southern Interstate Convention in Atlanta; he served again in the 1888 convention held at Montgomery, Ala., and he was chairman of the North Carolina delegation when this same convention met in Asheville in 1889. Burgwyn was one of the original callers of a convention of North Carolina farmers to petition the state legislature for the creation of an agricultural and mechanical college.

Aside from his business achievements and military distinctions, Burgwyn was an excellent orator and an author. He delivered many speeches all over the state on a variety of topics. In 1890 he addressed two literary societies of The University of North Carolina in an effort to establish a chair of history there. His address on the life and times of General Thomas L. Clingman in 1898 was a valuable contribution to the war literature of the South. In 1899 he addressed the State Bankers Association on the resources of North Carolina. While in Baltimore, Burgwyn published a Digest of the Reports of the Court of Appeals of Maryland. He was also the author of a number of valuable articles published by the industrial and political press. He wrote a sketch on Governor Z. B. Vance that was printed in the Library of Southern Literature and prepared sketches for Chief Justice Walter Clark on the "Regimental Histories of the 35th N.C. and Clingman's Brigade."

As an active member of the Episcopal church, Burgwyn was frequently a delegate to the diocesan convention. In 1886 and 1889 he was elected one of the lay delegates to represent his diocese to the general convention of the church.

Burgwyn married Margaret Carlisle Dunlop, daughter of James and Ann Dent Dunlop of Richmond, Va., on 21 Nov. 1876. They had no children.

Burgwyn died at the home of a nephew in Richmond. His body was moved to Raleigh, and he was buried in the Confederate section of the Raleigh Cemetery next to his brother, Colonel Henry Burgwyn, who was killed at Gettysburg.