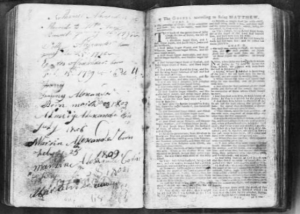 Nathaniel Alexander, physician, congressman, and governor, was born in Mecklenburg County, the oldest child of the six children of Moses and Sarah Alexander. Moses Alexander was an influential citizen of the colony; he held the rank of lieutenant colonel and served in the Cherokee boundary expedition and in both of Governor Tryon's campaigns against the Regulators.

Nathaniel got his early education in a nearby log school. He was graduated from Princeton University at the age of twenty. An interest in medicine was awakened at Princeton and further cultivated, and in 1778 he was commissioned a surgeon in a North Carolina regiment of the Continental army; he served until the end of hostilities, working under great difficulties because of the scarcity of medicine and hospital supplies.

After the war Alexander practiced medicine for a few years at High Hills of Santee, S.C., and then returned to his home state and practiced his profession in or near Charlotte. He became interested in the Masonic Order and was among those who petitioned the Grand Lodge to authorize a lodge in Charlotte. He became a charter member when the petition resulted in the establishment there of Phalanx Lodge 31 in 1797. The following year he was named junior warden, in 1802 senior warden, and in 1806 grand marshal. On one or more occasions he represented Phalanx Lodge 31 in the Grand Lodge, and shortly before his death he was named senior grand marshal of the Charlotte lodge.

Politically, Alexander became identified with the Jeffersonian Republicans. In 1797 he was elected to represent Mecklenburg County in the North Carolina House of Commons; in 1801 and again in 1802 he served in the state senate. He was then elected to both the Eighth and the Ninth Congresses, serving from March 1803 until November 1805. He resigned to become governor of North Carolina, succeeding Governor James Turner, who had been elected by the legislature to the U.S. Senate. Alexander's cousin, Evan Shelby Alexander, also served in Congress.

As governor, Alexander proved forward-looking and generally popular. Even the Federalists admitted that he was "an ornament to the predominant party and, like few of them, a scholar and a true patriot." With the support of discerning Federalists, he was reelected for a second one-year term.

Alexander took an enlightened stand on such public issues as internal improvements, reorganization of the court system, and popular education. In recognition of his leadership in education, he was elected president of the board of trustees of The University of North Carolina, in the days before the governor automatically held this position ex officio. He seems to have grasped the fundamental and indispensable place of education in a democracy, and later historians have acclaimed him as the forerunner of the series of educational statesmen that included Calvin H. Wiley, Charles D. McIver, Edwin A. Alderman, and Charles B. Aycock.

Unhappily for the state, a career marked by brilliance and unstinting service to his fellowmen and still full of promise was cut short less than a year after Alexander left the governorship. He died in Salisbury and was buried in the Old Cemetery of the First Presbyterian Church in Charlotte.

As a young man Alexander married Margaret, a daughter of Colonel Thomas Polk, Mecklenburg patriot and revolutionary officer. No children were born of the union.