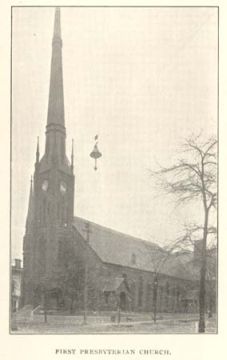 Argyll Colony was the first colony of Highland Scots to settle in the Upper Cape Fear. Settled in 1739, the colony was named for the shire in western Scotland from which its members came. They were the vanguard of what began as a trickle and grew into a flood of Highland immigrants to Bladen County (later divided into Cumberland, Moore, Robeson, Harnett, and Hoke Counties). By the 1770s Highland Scots comprised one-third of the population of that region, earning for it the sobriquet "Valley of the Scots."

The Argyll Colony sailed from Scotland in June 1739, arriving in North Carolina during September. They probably spent most of their first winter in or near Newton (soon to be renamed Wilmington) because they had not yet decided on a specific location for settlement. On 10 Nov. 1739 James Murray, a local merchant, wrote Henry McCulloh that four of the party had traveled upriver to inspect vacant land near his (McCulloh's) land, presumably a 100,000-acre tract in present-day Guilford and Alamance Counties. The Murray letter also implies that the Argyll colonists had previously negotiated with McCulloh, a London merchant and large-scale land speculator in North Carolina, about purchasing some of his land.

By February 1740 the colony's five leaders-Duncan Campbell, Daniel McNeill, Dugald McNeill, Neill McNeill, and Coll McAlister-had petitioned the colonial Assembly for an exemption from all taxes for ten years and a grant of £1,000 to be distributed among them. This indicates that by that date they probably had decided on which land to settle and had made entries for the property that was granted them the following June. In return for the favors requested, they had pledged to encourage their friends and neighbors to immigrate to the province. Exemption from taxes was granted but the award of £1,000 was not.

There is a persistent tradition that Governor Gabriel Johnston, himself a Lowland Scot, played a leading role in bringing the Argyll Colony to Cape Fear, but there is no evidence of this. Another popularly held but untenable tradition claims that other Highland Scots had preceded the Argyll Colony and that the colony on its arrival was greeted by kinsmen and former neighbors. Without doubt, the first Argyll colonists could not have envisioned the number of Scots who would follow them, although they certainly encouraged their peers to emigrate. The place they chose to settle became a Mecca for succeeding generations of Scottish immigrants; indeed, the Valley of the Scots became home to the largest aggregation of that nationality in the continental United States.

The Journal of the North Carolina Scottish Heritage Society, The Argyll Colony Plus: http://www.theargyllcolonyplus.org/Home/tabid/139/Default.aspx

The story of Fayetteville and the upper Cape Fear by John Alexander Oates.

Thank you for this excellent,

Thank you for this excellent, referenced information on the Argyll Colonists. 7th GGDaughter of John Smith and wife Margaret Gilchrist by their son Malcolm.

Hi Christine -
I had just gone back to this site to find out if I could find out anything about the descendants of John Smith and Margaret Gilchrist of which I am one, also. I’d done research on their daughter, Jennet, sister of Malcolm, but she married a McNeil and I am not descended from her but from Malcolm.
Could you tell me where you found information on the descendants of Malcolm? My father’s family (the Smith line) ended up in Raleigh but I have no information between John Smith in 1737 and Raleigh in the early 1800s.
Have you found out where they were from in Argyll? Was it Gigha? Do you know what they did professionally?
Do you live in NC? I live in NY.
I’d love to hear from you.
Dinah Maxwell Smith

Hi, Dinah, I just stumbled across this post. I am descended from Jennet, or "Jennie Bahn" who married Archie McNeill. so you and I are kin through John Smith and Margaret Gilchrest. So although I can't answer your question, I wanted to contact you. Alice Mason was tracing the lines of several of my ancestors -- yours, too, no doubt. She died some years back but there was a Smith who took over her information. I also have a cousin descended from my great-uncle William Murchison, and I believe she is from Raleigh. Email me and let's put our heads together. By the way, some of the information on these lines is wrong -- if it comes from California, it was probably errors passed on to a cousin out there from my cousin Carolyn Murchison Flynn who inherited it from her mother. Alice's account makes more sense.

Hello all!,
I’m new at this so please have patience. My greeeeaat was Duncan McCoulskey and Christine my grandmother. Duncan was born on the Isle of Jura. Can anyone help?
Best,
James Alligood McColskey III

Could you connect me with the

Could you connect me with the library info, as well? I'm descended from Duncan McCoulskey from Jura, Argyll, Scotland as well. I'm also trying to locate what clan he was a part of. Thank you very much.

Nothing was sent to them as they never responded when we contacted them. If you need some help, feel free to contact us at https://statelibrary.ncdcr.gov/contact-us/contact-us-form

My Gurley ancestors were

My Gurley ancestors were numerous in NC by 1800, according to the census, and I find them in late 18th tax records. But I cannot find anything online that show where they were before they appear in Anson Co, for ex., like my ancestors buried at Buffalo Church near Greensboro. Where should I be looking? JRJ

I am the 7th great

I am the 7th great-granddaughter of Angus & Isabell Galbraith. Angus was born is Isley in 1720 and Isabell was born in 1724. Their son Neil Galbraith is my 6th great-grandfather. He was born in 1740 and married Martha Autry whose family migrated to Edgecombe county from Ireland. I enjoy researching my family. I believe the Galbraiths migrated to NC from Gigha, Scotland in late 1730's to early 1740's. I would appreciate any information that you can share. The Galbraiths changed their name to Culbret h before or around the Revolutionary war. They settled around the Black River in Sampson County NC. Neil Culbret h was a patriot in the Revolutionary War#ancestor A 028450. Sincerely, Lynn Frances Williams, Autryville, NC

Dear Lynn,
If both our ancestry research is correct we are distant cousins. It appears that Neil & Martha had 9 children. The 7th, Cornelius was my 5th Great Grandfather. We have spent many hours tracing the name and travels of the Culbreth's/Galbraith's including a trip to the Culbreth Cemetery in Sampson county and the Isle of Gigha where the trip began. In Gigha we discovered a large cemetery full of Galbraith's. Most of our detail info has came from Ancestry.com and the courthouse in Cumberland Co. We have many gaps and continue to research. I am currently tracing Angus, with very little luck. It appears he traveled to Wilmington with Neil. The only birth info I show is "Scotland", but assume he traveled to Gigha from elsewhere in Scotland.
Slainte,
Don