The birthplace of Andrew Johnson, seventeenth president of the United States, is believed to be a small, one-story house with a loft structure now standing in Mordecai Historic Park near downtown Raleigh. The building originally stood on the back side of lot 162, where Casso's Inn was located. Its exact date of construction cannot be documented, but architectural experts believe that it could date from the late eighteenth century. The kitchen-turned-dwelling generally conforms to several structures described as outbuildings by Peter Casso in 1809 (the year of Johnson's birth), but if it is one of those structures, it managed to escape the devastating fires that ravaged the east side of Fayetteville Street in 1816 and 1821. Extensive research has neither proved nor disproved the validity of the Andrew Johnson Birthplace, and it has not solved one of the most intriguing mysteries related to the house. In 1867, when the president returned to Raleigh to dedicate a monument at his father's grave, his itinerary was meticulously detailed in the local newspapers; yet, no mention whatsoever was made of a visit to, inquiry about, or interest in the house in which he was born. 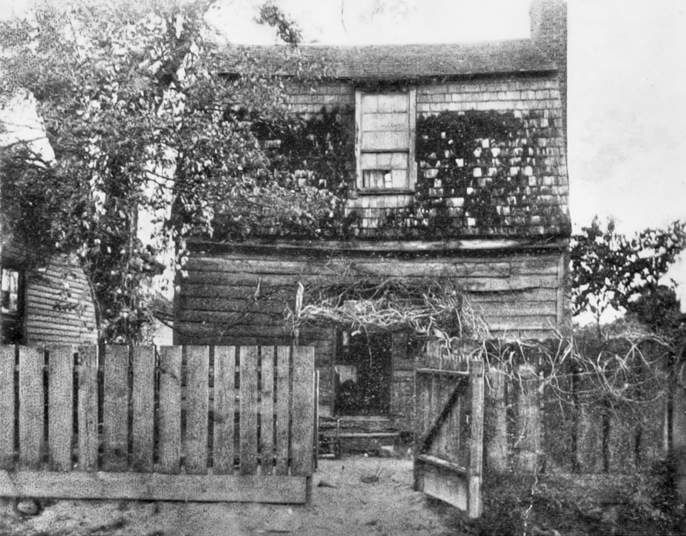 Whether the authentic building or one constructed at a later date, the house known as the Andrew Johnson Birthplace stood on its original site until the early 1880s. Sometime between 1880 and 1884 Catherine Pool purchased the structure, moved it to lot 33 on Cabarrus Street, and rented it to a black family. Around 1887 the house was first identified as the birthplace of Johnson-a designation promoted, if not created, by Col. Frederick A. Olds, who later founded the Hall of History (precursor to the North Carolina Museum of History). The association of the house with Johnson inspired the Wake County Chapter of the North Carolina Society of the Colonial Dames of America to buy it, for $100, in 1904 and arrange with the city of Raleigh to have it moved to Pullen Park, where it could be preserved as part of the state's heritage.

Located at first near the railroad, the birthplace was later moved to a second site in the park for better protection. A restoration project was undertaken, and the house opened to the public in 1940. Closed during World War II, it reopened in 1948 while restoration continued. In 1975 the Andrew Johnson Birthplace traveled to its fourth and perhaps final location in Mordecai Historic Park, where it stands as an exhibit on the early history of Raleigh.

Andrew Johnson's birthplace, ca. 1906. The photograph was likely taken before the house was moved from its original site. North Carolina Collection, University of North Carolina at Chapel Hill Library.