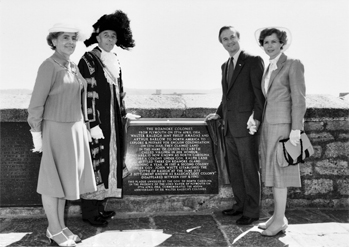 In April 1984 the celebration began in Plymouth, England, when a North Carolina delegation led by Governor James B. Hunt Jr. unveiled a plaque in memory of the colonists and explorers. In July of that year, Her Royal Highness the Princess Anne came to North Carolina, where she began the American phase of the celebration. Events over the next two years included celebrations of the arrival of the first colony in 1585 and Sir Francis Drake carrying the colony back to England in 1586. In April 1987 Governor James G. Martin led a delegation to Portsmouth, England, to commemorate the departure of the "lost colonists" from that port city. The celebration ended in August 1987 with the commemoration of the 400th anniversary of the baptism of Croatoan Indian leader Manteo and the birth of Virginia Dare, the first child of English parentage born in the New World. For Dare's birthday, an enormous cake was displayed and enjoyed in the visitor center at Fort Raleigh on Roanoke Island. Each of these events was broadcast live on television through the efforts of WRAL-TV of Raleigh, the North Carolina Association of Broadcasters, and the UNC Center for Public Television.

With the goal of making people aware of the significance of the Roanoke voyages, the anniversary committee left many legacies, the most tangible of which are the sixteenth-century-style ship Elizabeth II, its visitor center, and the Outer Banks History Center in Manteo. An impressive array of publications-5 books, 10 pamphlets, and 30 folders-also won the praise of scholars and lay people alike. The committee sponsored symposia and teacher workshops and worked with schoolteachers and librarians for the timely return of the teaching of North Carolina history to the school curriculum.

Archaeology played an important role in the celebration. Major archaeological work took place at sites in Hertford and Hyde Counties, and information obtained at both locations added greatly to the knowledge about Native Americans who lived in northeastern North Carolina in the sixteenth century. In 1986 the committee celebrated the "Year of the Native American" in an effort to make the people of North Carolina aware of the heritage of the state's Indian population.

Although state funds were used to finance many of the events surrounding America's Four Hundredth Anniversary Observance, corporations, foundations, and individuals also contributed more than $2 million in private funds for the activities.