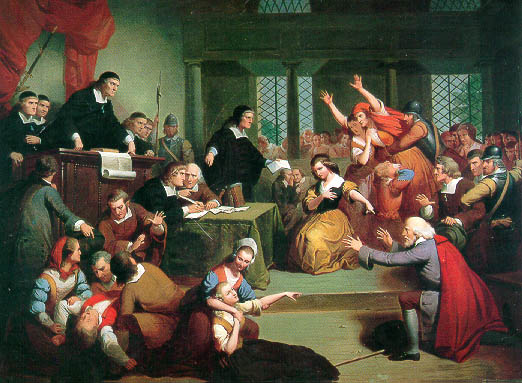 Belief in witchcraft influenced people for hundreds of years, and many unexplained occurrences were considered supernatural in origin. In America, the New England colonies were the scene of notorious witchcraft trials, but the southern colonies generally escaped such serious consequences. In 1679 North Carolina law directed local officers to investigate felonies, witchcraft, enchantments, sorceries, and magic arts, among other crimes. The next year, a woman in Perquimans Precinct was jailed on a charge of witchcraft. Court records describe such women as "concerned with familiar Spirits under ye Notion of a Wich."

By the early years of the eighteenth century, witchcraft trials in Massachusetts were ending, and North Carolina courts stopped convicting those accused of such activity. Some cases apparently were either dropped, not prosecuted, or lack complete records. More interesting are cases in which the court rejected charges of witchcraft. In 1706 Walter Tanner accused Mary Rookes of being a witch, which she denied. The court believed her and fined Tanner five shillings. Rookes also faced a similar charge brought by Thomas Collins, who claimed she had bewitched his wife. The court again found her innocent and fined Collins one shilling and costs.

Belief in witches and the supernatural has prevailed throughout the ages. Early settlers in North Carolina believed the Indians could "raise great Storms of Wind and that there were many frightful Apparitions that appear above the Fires during the time of their Conjuration." In April 1768 royal governor William Tryon issued commissions to a number of men to keep the peace, empowering them to hear cases involving charges of "Enchangments, Sorceries, Art Magick," and related causes.

In 1805 the Reverend Brantley York wrote that the belief in witchcraft was widespread in Piedmont North Carolina. He noted much talk of witches and ghosts and observed that people thought witches could change into animals. Witches were also said to be able to enter a house or room through a keyhole and to cast spells on people, animals, and crops.

Men were not immune from charges of witchcraft. In the eighteenth century, Henry Norman was charged with witchcraft, and Duncan McFarland of Laurel Hill in Richmond County was in court at almost every session in the early nineteenth century charged with a variety of transgressions, often including witchcraft.

Although belief in witchcraft, and groups of those professing their belief, has continued in North Carolina, the stereotypical image of witches as evil or dangerous does not persist in any significant way. Many towns are home to organized pagan or wiccan organizations and witch covens, including Shelby's North Carolina Piedmont Church of Wicca, Charlotte's Sacred Oak Grove Coven, Greensboro's Royal Order of the Knights of Herne, Havelock's Shadowwind Coven, Lexington's Gathering of the Silver Rose, and Raleigh's Coven Greyshadow. In addition to practicing traditional witchcraft, these groups express an underlying spirituality in a variety of ways and often have an environmentalist focus.

"The Trial Of George Jacobs." Jacobs was accused of witch craft in New England during the Salem Witch Trials in 1692; he was found guilty and hanged. Image courtesy of the Four Corners Project at the University of Northern Colorado. Available from http://www.unco.edu/fctah/teaching_resources/colonial_history.html (accessed May 21, 2012).