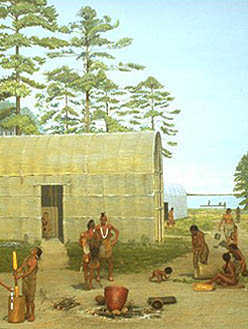 The Weapemeoc Indians, also known as the Yeopim Indians, were a branch of Algonquian-speaking peoples living in sprawling villages along the northern rim of the Albemarle Sound when the Roanoke Island colonists arrived in the 1580s. The subtribes of the Weapemeoc included the Pasquotank, Perquimans, and Poteskeet. They were partly agricultural and raised several varieties of beans (pulse), melons, and gourds, as well as corn, squash, and other vegetables. They were also food-gatherers, hunting turkeys and deer. During the summer months, fish, shellfish, raspberries, strawberries, walnuts, hickory nuts, and acorns supplemented their diet. Severe outbreaks of epidemic diseases during the seventeenth century seem to have devastated the Weapemeocs, who are believed to have had 700 to 800 warriors in 1586, roughly the same in 1600, and only 200 by 1700. One of the Weapemeoc settlements to survive was within modern-day Perquimans County, the name of which was reportedly derived from the name of the Indians who lived there.

Maurice A. Mook, "Algonkian Ethnohistory of the Carolina Sound," Journal of the Washington Academy of Sciences 34 (15 June, 15 July 1944).

"Scene depicting an Algonquian village in the Carolinas. Photo courtesy of the University of Michigan Exhibit Museum" Accessed via National Park Service. Available from https://www.nps.gov/nr/travel/jamesriver/colonization.HTM (accessed May 23, 2012).

My ancestors lived in

My ancestors lived in Pasquotank, Camden, Chowan and Perquimans counties. Who were the Chowan Indians? Who were the Weapemeoc Indians?

you should add the games they

geneology--place my family at roanoke island-and was looking for names of tribes in that area . either killed off or slaved or adopted with the others

By separate email I am going to connect you with reference services at the Government & Heritage Library at the State Library of NC.  Librarians will be able to assist you in locating information to help answer your question.

I'm also including here a link to the "Contact Us" page on the library's website http://statelibrary.ncdcr.gov/contact.html.  If you follow the link you'll find contact information as well as information about the library's collections and services.