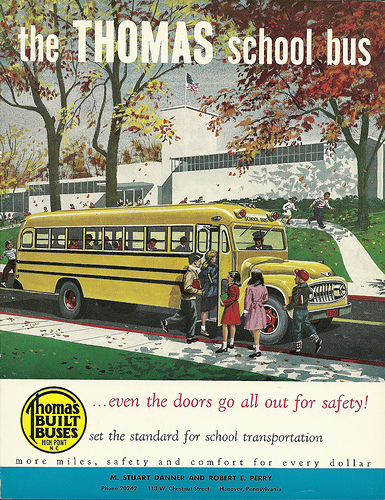 Thomas Built Buses, Inc., headquartered in High Point, is one of the largest manufacturers of school and commercial transit buses in North America. Perley A. Thomas, known in the industry as "Mr. P.A.," learned his trade as a yacht and streetcar designer in Detroit and Cleveland after leaving his Canadian farm in 1900. He subsequently obtained the job of chief engineer for a small streetcar manufacturer known as the Southern Car Company in the tiny North Carolina town of High Point. The company was growing, selling every streetcar it could produce, but stiff competition put it out of business in 1916.

Thomas then worked independently as a skilled wood craftsman until a call came from the Southern Public Utilities Company-later renamed the Duke Power Company-which needed to renovate some of its streetcars. He called upon a few others who had worked for Southern Car and sent a repair crew to Charlotte, staying home to see if he could develop a new business. When he won a contract to refurbish streetcars for the U.S. Navy shipyard in Mobile, Ala., Thomas and sons Willard and Norman launched a firm bearing their name. The Depression of the 1930s nearly sank the Thomas company, coming at a time when power companies and municipal governments were looking for new ways to administer public transportation at minimal cost.

In 1936 the state of North Carolina advertised for bids for the construction of 500 buses for its school system. With a carefully prepared bid of $195 for a 17-foot bus, $205 for a 19-footer, and $225 for a 21-footer, Thomas's successful proposal reinvigorated his company. By 1972 the number of executives and family heirs in the Thomas Built organization was well over 100, and the idea of taking the company public was explored but dropped when management worked out arrangements for a leveraged buyout of most of the stockholders. The family maintained a majority on the board while being joined for the first time by new outside directors. By 1997 there were only two Thomases and two other men who had married Thomases active in day-to-day operations.

Modern school buses are built with all-steel bodies that reflect a continued emphasis on safety for their young riders. The Thomas Built company competes with builders of school bus bodies in nearly every state in the Union and a few that seek a national niche. The firm had sales of about $400 million in 1996. In 1998 it became part of the Freightliner LLC group, a Daimler-Chrysler company. Still headquartered in High Point and privately held, with several manufacturing facilities, Thomas Built Buses had about 1,600 employees worldwide in the early 2000s and was producing approximately 14,000 vehicles annually.

Clint Johnson, From Rails to Roads: The History of Perley A. Thomas Car Works and Thomas Built Buses (1996).