High Point is a city primarily located in southwestern Guilford County, though the city limits extend into Davidson, Forsyth, and Randolph Counties as well.  It was incorporated in 1859, and so named because it was the highest point on the Goldsboro-Charlotte Railroad.  The town grew up at the intersection of the railroad line and the Fayetteville and Western Plank Road. 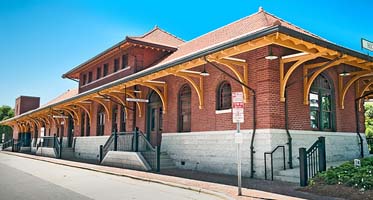 High Point has long been known for its industries.  The town's excellent location, with both a major transportation crossing and stands of high quality timber nearby, drew multiple entrepreneurs, and by 1878 the first mass manufacturing facility (making shuttle blocks for textile makers) had opened.  In 1889, the High Point Furniture Company began operations. More than 40 furniture companies were located in the town and surrounding area by the turn of the century, and the first Furniture Exposition opened in 1905.


In addition to the twice yearly High Point Market (the successor to the Furniture Exposition), which draws more than 85,000 people per show, the city is also host to the highly regarded North Carolina Shakespeare Festival each autumn.

Marks, Robert. 1996. High Point: Reflections of the past. Montgomery, Ala. : Community Communications