Streetcars, also known as street railways or trolley cars, began operating in Wilmington and Raleigh in 1887. Initially drawn by horses, they were soon powered by electricity, first in Asheville in 1889 and the next year in Winston and Salem; Wilmington made the conversion to electric streetcars in 1892. Charlotte's trolley cars appeared in 1891, and those in Durham and Greensboro began operating in 1902. Concord, Gastonia, Goldsboro, High Point, Salisbury, Spencer, Southern Pines, and Pinehurst also featured streetcars. 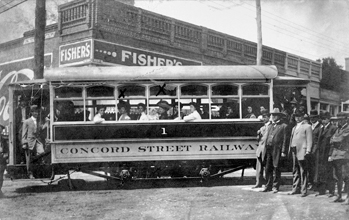 To satisfy riders, some streetcar companies had two sets of cars-closed ones for winter weather and breezy, open ones for the summer. Many companies developed outlying amusement parks (sometimes called "electric parks"), picnic areas, or similar attractions to draw prospective riders. Wrightsville Beach's interurban line from Wilmington included the well-known Lumina dance pavilion, and the Charlotte street railway's Lakewood Park even provided a small lake for sailboating. With some exceptions, most of North Carolina's streetcars were replaced by motor buses by the 1930s.