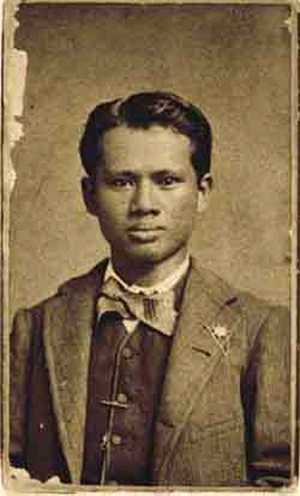 Charles Soong, born Han Chiao-shun (1866 - May, 1918), was the first international student enrolled in the Trinity College (later Duke University) and reportedly the first person of Asian descent to be baptized in the state of North Carolina.  He was born in Wenchang City on the island of Hainan off the southern coast of China, the third son of Han Hung-i. His education in America led him to amass a substanital fortune as a successful businessman and industrialist in Shanghai which he used to impact the course of Chinese politics by supporting the Chinese Nationalists. He was also an American-trained Christian missionary and patriarch of the influential Soong family.

At the age of nine, Han and one of his brothers were sent by their father to the island of Java (in modern day Indonesia) to work with one of his relatives. Sending children away to work was a common practice among the poor from Hainan. The boy was not satisfied with his situation in the East Indies and decided that he wanted to leave. In 1878, Han’s uncle (or other relative) decided to adopt him and take him back to the United States to learn the life and work of a tradesman. While in America, his uncle renamed him Soon Chai-Jui. When they arrived in Boston, Soon worked in his uncle’s tea and silk shop.

Two young men, Wen Bing-chung and New Shan-chow, both from Shanghai and students at the Chinese Education mission in Boston, befriended Soon after visiting his uncle’s shop. Soon’s two new friends told him about their schooling and convinced him that education was important for his success in America. They urged Soon to ask his uncle if he could attend school with them, which he did. His uncle was furious that he did not want to continue the family business in Boston and refused to let Soon attend school.

Fleeing his uncle’s shop, Soon stowed away on a Coast Guard vessel, The Albert Gallatin, moored in Boston Harbor. He was found on board after the cutter set out to sea. The Norwegian captain, Eric Gabrielson, was a devout Methodist and an admired Coast Guard captain. He befriended the young boy after Soon told him about his past and his desire to pursue an education. Gabrielson allowed Soon to work on the ship for pay as a member of the Coast Guard despite being underage. He frequently talked to the boy about Christianity and occasionally took him to church when the ship was in port. Soon became fascinated with the life and stories of Christ.

In May 1880, Captain Gabrielson was transferred to work on the cutter Schuyler Colfax stationed in Wilmington, North Carolina, and Soon decided to follow him. Some accounts say Soon was discharged at the request of Gabrielson before traveling to Wilmington, while others say it was after arriving in Wilmington. Gabrielson introduced Soon to Colonel Roger Moore and Reverend Thomas Page Ricaud. Soon converted to Christianity and was baptized on November 7, 1880 at the Fifth Street Methodist Church in Wilmington by Ricaud and given the name Charles James Soon or Charles Jones Soon or Soon. Charles was believed to be the first recorded “celestial” (the name for a person of Chinese descent used by Americans at the time) to be baptized in the state of North Carolina.

Soon wanted to pursue his education and intended to return to China as a missionary. The Methodist church saw potential in Soon and believed that he would make a good missionary. Ricaud appears to have written to Trinity College president Braxton Craven to enroll Soon at the school.  He also appears to have contacted wealthy philanthropist Julian S. Carr, a successful entrepreneur in Durham. Ricaud explained Soon’s desire for schooling, and Carr decided to finance his education at Trinity College.

Charles “Charlie” Soon enrolled and became the first international student at Trinity College in Randolph County (Trinity College moved to Durham in 1892). He stayed at Trinity College for about two years (April 1881 - Fall 1882) and studied under, or was tutored by, Dr. Braxton Craven, the school’s president. In 1882, Soon was transferred from Trinity College to Vanderbilt College in Nashville, Tennessee, where he studied religion. He graduated in 1885 with a degree in theology, although according to one source, Soon was not awarded a diploma because he was a “special student” and rushed through his studies.

After Vanderbilt, he intended to pursue a degree in medicine to complement his missionary work. Carr appears to have intended to finance the rest of Soon’s education. Instead, Bishop Holland N. McTyeire, the chancellor at Vanderbilt, rejected this idea and sent Soon to do missionary work in China with the Southern Methodist China Mission. Soon arrived in Shanghai in January 1886. He had to learn a new dialect and adjust to his new life which was very different from his life in the United States. His job was to preach to the recently converted Methodist Chinese and teach their children at the denominational school.

Soon was appointed to K’winsan circuit in the Soochow district in November 1886. In the summer of 1887 he married Ni Kwei-Tseng, a relative of his two friends New and Wen in Boston.  He was later transferred to the Ts’ipao circuit in Shanghai to continue his missionary work and taught in several schools in the area. He retired as a Christian missionary in 1892. There were two reasons for Soon’s retirement from his missionary work: one was conflict with his works director, the other was money. His works director, Dr. Young J. Allen, refused to let him visit his parents and looked down on Soon, calling him a “denationalized Chinaman” because he did not share the same dialect and customs of his countrymen.

After his retirement, Soon remained a devout Christian and continued to be an active part of his religious community, teaching Sunday school classes and providing financial support to the Methodist church. During this time he became a successful businessman, through large-scale printing and selling of bibles. It appears he may have begun this venture with financial support from Julian Carr. It was also at this time that he began using the surname “Soong”. Later he founded and managed the Fou Foong Flower Mill in Shanghai and helped establish the YMCA in China.

Soong had six children, three girls and three boys, all born before 1900. The Soong family was a major influence on the Chinese government and the politics of the country. Charles Soong’s children were educated in the United States and became successful and influential politicians and bankers both in China and the United States. His first child, Ai ling, was born in 1890, and given the Christian name Nancy after Mrs. Julian Carr. She married H. H. Kung, a wealthy banker and finance minister of China. In 1892 his daughter Ching-ling was born and given the Christian name Rosamond. His first son was born in 1894 and named Tse-ven (T.V. Soong). T. V. was educated at Harvard and became finance minister and briefly premier of the Republic of China. In 1897 their third daughter, May-Ling, was born; she was referred to as Olive. Following were his two sons, Tse-liang (referred to as T.L.) and Tse-an (referred to as T.A.).

Around 1894, Charles Soong met and became close friends with Sun Yat-sen, founder of the Kuomintang (KMT), the Chinese Nationalist Party. Soong was appointed as the treasurer of the Revolutionary Alliance and helped finance the Chinese Nationalist Party revolution movement in 1906. Sun Yat-Sen married Soong's daughter Ching-ling and became president of the Republic of China. Ching-ling apparently later supported the Communists during the Chinese Civil War. May-ling married Sun's successor, Chiang Kai-Shek and is known to history as the influential Madame Chiang.

Soong died in Shanghai, May 3, 1918.The cause was said to be stomach cancer but was not verified. Soong was recognized for his contributions to and influence on the Methodist church and China with the dedication of the Charles Jones Soong Memorial Building at the Fifth Street Methodist Church in Wilmington North Carolina on November 1, 1942.