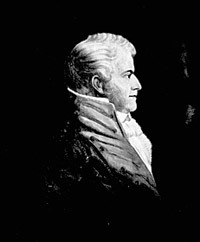 Benjamin Smith (1756-1826) owned what is now Bald Head Island and was once known as Smith’s Island. Born on January 10, 1756, in present-day Brunswick (then New Hanover) County, he came from a family of considerable wealth and social standing. His father Thomas was a prosperous planter and the grandson of Landgrave Thomas Smith of South Carolina. His mother Sarah was the daughter of “King Roger” Moore, owner of Orton plantation and long-time member of the colonial Council of State. Little is known of Smith’s early youth or education, but in 1774 he was admitted to the Middle Temple of London’s Inns of Court. Benjamin Smith’s wife was the former Sarah Rhett Dry, daughter of Colonel William Dry, collector for the Port of Brunswick. They were the parents of two adopted children.

After returning from London, Smith fought with distinction in the Revolution, serving under George Washington in New York and with William Moultrie in South Carolina. By the war’s end he had risen to the rank of colonel. In 1784 he was elected to the Continental Congress, but there is no evidence of his attendance. During that same year he represented Brunswick County in the upper house of the General Assembly. Later he was elected to the state constitutional conventions of 1788 and 1789. Smith represented Brunswick County in the state House from 1789 to 1792 and in the Senate from 1792 to 1800, from 1804 to 1810, and once again in 1816. From 1795 to 1799 he served as speaker of the Senate. Strongly affiliated with the Federalists throughout his early years in the legislature, Smith was later associated with the Republican Party.

When the University of North Carolina was chartered in 1789, Smith was named to the original board of trustees and donated 20,000 acres of land in present-day Tennessee to the school as an endowment. Thereafter, he remained a trustee until 1824. During much of the period he was under contract with the federal government to rebuild and expand Fort Johnston at Smithville (now Southport), the town established and named in his honor in 1792. In 1789 he purchased the tract at the mouth of the Cape Fear River that came to be known as Smith Island and in 1794 he sold the federal government land for construction of the first lighthouse on that landmass. In 1797 he was promoted to major general in the state militia; in 1807 he served as the state’s adjutant general.

Smith was elected governor on December 1, 1810. He served a single term, declining to stand for reelection. As chief executive, he advocated reforms in the penal system, encouragement of industry, revitalization of the militia, and the establishment of an educational system “within the reach of every child in the state.” His complaint that the governor’s accommodations in Raleigh were not “fit for the family of a decent tradesman” may well have hastened construction of the first executive mansion, which was completed three years later.

Following his governorship, Smith returned to Brunswick County and to the life of a prosperous planter. His once enormous wealth, however, was increasingly ravaged by financial misfortunes, personal extravagance, and long-term debt obligations. Though once the owner of Orton plantation, his last remaining residences were at Smithville and at his Belvedere plantation near Wilmington. It was at his dilapidated Smithville residence that he died, a virtual pauper, on January 26, 1826. Initially buried at Smithville, he was later reinterred in the churchyard of St. Philips at Brunswick Town.

Cobb, Colier. Presentation of portrait of Governor Benjamin Smith to the state of North Carolina, in the hall of the House of Representatives, at Raleigh, November 15, 1911, by the North Carolina Society of the Sons of the Revolution. https://archive.org/details/presentationofpo00cobb

Do you have the names of

Do you have the names of Benjamin Smith's children?

Thank you for your question. I am forwarding it to Reference Services at the Government & Heritage Library. They will follow up with you.