In 1778, during the midst of the Revolutionary War, citizens of the southern half of Guilford County petitioned the NC General Assembly to create a new county, arguing that the “great distance to Guilford Court House rendered it grievous and troublesome to the inhabitants thereof to attend the courts, assemblies, elections and other public meetings.” The assembly of 1779 passed an act forming a new county, naming it “Randolph” in honor of Peyton Randolph of Virginia, who twice served as President of the Continental Congress. The act appointed Thomas Owen, Col. John Collier, John Adineal, Jacob Sheppard, James Martin, and William Dent to survey the proposed Guilford-Randolph County line. It also appointed Absalom Tatom, William Cole, John Hinds, John Collier and William Bell as Commissioners for determining the most convenient place for erecting the courthouse, prison and stocks.

During this time, a small log house, located 400 yards east of the Reece residence on land owned by Stephen Rigdon, was under construction. The log house (Courthouse #1), which would be used for hosting court, was located at a crossroads where the old trading path (Salisbury-Hillsborough Road) intersected the road running from Cross Creek to Salem and where the weekly stage coach brought mail and passengers. The fourth court session was held in this log structure on December 13, 1779.

A two-story courthouse (Courthouse #2) later replaced the log house. Tom Dougan donated a hundred acres to the county, and the new county seat located thereon was to be known as Johnstonville as a tribute to Samuel Johnston, the governor of the state at the time. Johnstonville gradually declined, and no trace remains of this once-thriving village. Other sections of the county began to gain population, and citizens complained that the courthouse was too far away (the same complaint that had caused Guilford County to be divided). Residents sought to establish the new county seat at the geographical center of the county.  Surveys concluded that this central point lay within a two-hundred-acre tract acquired in 1786 by Jesse Henley. The tract’s only inhabitant was an old man named Abram, who lived in a small cabin. In 1793, Henley conveyed, for ten shillings, two acres of land on Abram’s Creek, and the first session of court in “Asheborough” was held on the “Publick Ground” in a small building (Courthouse #3). The building was built on newly cleared land at the intersection of present day Main and Salisbury Streets on June 12, 1793.

On Christmas Day 1796, the General Assembly ratified legislation establishing “a town on the lands of Jesse Henley in the County of Randolph at the courthouse of said county,” noting also that Henley had consented to have fifty acres “laid off” for a town with one-acre lots. The new county seat, Asheboro, was named for New Hanover County’s Samuel Ashe, who was a distinguished soldier of the American Revolution, a superior court justice, and governor of North Carolina from 1795-1798. The town’s name has been spelled different ways over the years. First it was “Asheborough,” then “Ashboro,” and the present “Asheboro” was adopted after U.S. Representative William Cicero Hammer of Asheboro persuaded the postal service to standardize the name. The name “Asheboro” became official on January 10, 1923. From its establishment in 1796 until the beginning of the nineteenth century, Asheboro’s chief reason for existence was the county court.

In 1805, Courthouse #4, which was the first courthouse built in the geographical center of the county, was a large two-story frame building. The 1805 building was replaced in 1830 by a small two-story brick courthouse (Courthouse #5). The 1830 building was deemed defective in 1838, and a new one was to be built.

There was a great deal of controversy concerning the construction of Courthouse #6. Initial approval to build the sixth Randolph County Courthouse occurred in February 1839. The new Courthouse, constructed of brick, would be located in the middle of “the square” at the intersection of present day Salisbury and Main Streets in Asheboro. However, during the May 1839 court session, another vote was taken on whether the new courthouse should be constructed of wood or brick. This time, by a narrow margin, “wood” prevailed.   Then, during the August 1839 court session, action was taken to rescind all prior orders and proceedings concerning building the new courthouse because the Commissioners were unable to procure proper materials for commencing construction; of course, this further delayed construction. Fortunately, George Hoover, who had bought Courthouse #5 at public sale, agreed that the sale could be rescinded if the Court ordered the erection of a new brick courthouse; the court agreed, thus allowing the uninterrupted use of Courthouse #5 until #6 could be completed.  At the same session (August 1839), Jonathan Worth (future Governor), Jesse Walker, James Elliott, Elisha Coffin & Hugh McCain were appointed Commissioners to superintend the construction. Unfortunately, there is no record of the completion date of Courthouse #6. It is known, however, that it was expanded in 1876 with the addition of wings on its east side, enclosure of the stairway, and its new front facing the south. 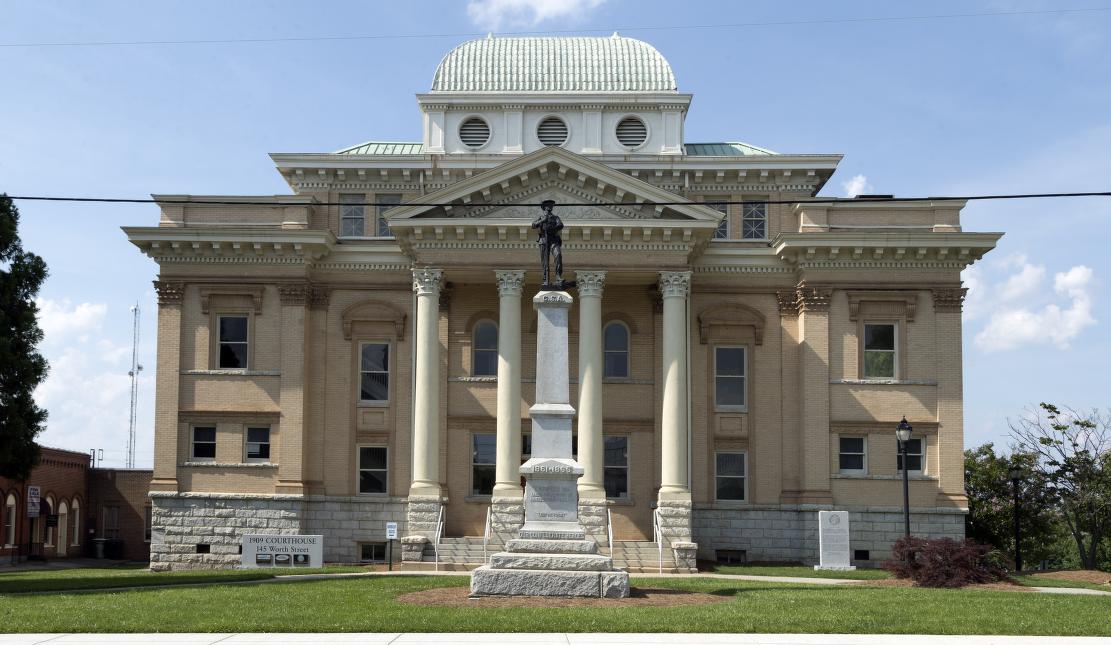 On July 1, 1907, the Board of Commissioners, who still met at Courthouse #6, voiced the need for a larger, more conveniently located building for the courthouse and County offices. Commissioners J.W. Cox, H.G. Lassiter and Chairman Arch N. Bulla noted that the old “Publick Ground” had lost its place as the focal point of Asheboro almost twenty years before, due to completion of the railroad in 1889 when the town began migrating toward the Sunset Avenue railroad station. On November 4, 1907, the Commissioners paid $300 to the firm of Wheeler, Runge and Dickey for copies of their plans of the Iredell County Courthouse design. After months of indecision by the Commissioners due to public concern and opposition about relocating the courthouse, in April of 1908, twenty-eight citizens took matters into their own hands.   These citizens purchased property on Worth Street owned by Col. A.C. McAlister with the condition that the County must begin construction of a new courthouse by July 1908. Following a public hearing in June 1908, construction on Courthouse #7, located at present day 145 Worth Street, commenced. The first term of court was held in the building on July 19, 1909.

The 1839 approved courthouse was demolished and its bricks were used to build a new county jail in the rear of the building in 1914; a county agricultural building and health department headquarters were later added to the complex. A sizeable addition (annex) for the Register of Deeds and Clerk of Court was built in 1950 at a cost of $100,000; it provided offices for the Clerk of Court, Register of Deeds, Tax Department, and County School Board. In 1975, the annex was remodeled to provide additional courtroom space, and it was expanded again in 1979 to provide space for two more courtrooms and an even larger Register of Deeds. Between 1950 and 1980, the County built three additions to the 1909 Courthouse.

In 1998, planning began for the 8th Randolph County Courthouse on the corners of Cox, Worth and Salisbury Streets. After that structure opened July 1, 2002, the 1914 jail and the 1950 courthouse annex were demolished. As part of the new construction project, the 1909 courthouse received a new roof and exterior paint job in 2001, but was mothballed, awaiting future renovation once court activities moved to the 2002 building.

In 2008, County Commissioners voted to renovate the Historic Courthouse on Worth St. to be used as office space for the Tourism Development Authority and the Economic Development Corporation. The upstairs courtroom was renovated for use as a meeting room; the first meeting held in the newly renovated room was by the Randolph County Historic Landmark Preservation Commission.

On November 3, 2008, the Historic Landmark Preservation Commission approved a request for local landmark designation and recommended to the City Council of Asheboro that the 1909 Randolph County Historic Courthouse be designated as a Local Historic Landmark.

On December 4, 2008, the Asheboro City Council approved an ordinance designating the 1909 Randolph County Historic Courthouse as a Local Historic Landmark.

May 2, 2011 was the first meeting of the Randolph County Board of Commissioners in the renovated 1909 Courthouse; all those involved with the renovations were recognized.