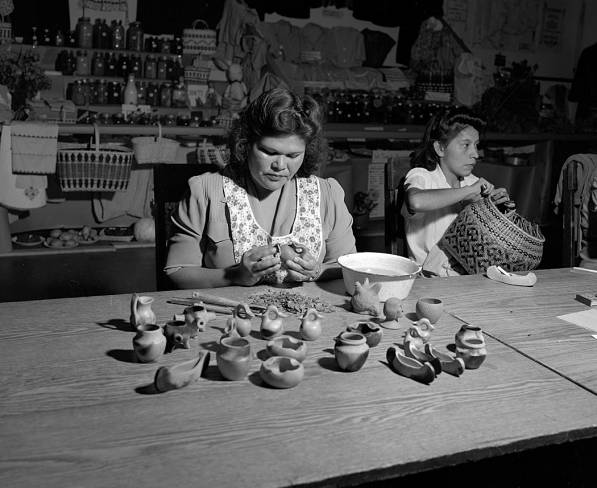 The first potters in North Carolina were Native Americans, who used the coil-building method to make pottery. They shaped clay into long snakes, made the snakes into circles, and stacked them to form bowls and jars. Artifacts indicate such pots were used by the Cherokee in the early sixteenth century.  With the exception of the coastal plain, most of North Carolina had, and continues to have, clay-rich soil suitable for making pottery. The settlers soon realized that they could use the skills they had learned in their native countries to work this clay and avoid paying for storage vessels, sometimes even receiving a small income by selling jars and jugs they made. Most potters in the early decades were farmers who potted on rainy days, in the winter, or at other times when they could not work the fields. Some European settlers learned coil-building from Native Americans, and others brought knowledge of European wheel-built pottery practices.

By 1766, the Moravians, who settled in Salem, North Carolina, had developed unique and popular ways of making and decorating pottery. In Western North Carolina, specifically the Catawba Valley, there was also a community of potters forming, and in the center of the state seven European families settled within a ten-mile radius of each other near the area that is now Seagrove. They made strictly utilitarian wares for food storage, preparation, and preservation, occasionally adding a whimsical item such as a face jug or a tobacco pipe. These men did not consider pottery an industry or an art; they made pieces for themselves and sometimes for sale, but they did not seek to express themselves or impress others. Decorations were simple blue sine waves or perhaps a flower.

Daniel Seagle arrived in the Catawba Valley in the early 1800s. Seagle used the alkaline glaze, comprised of wood ash, silica in the form of sand or powdered glass, and clay, with water to control viscosity. It was fired to 2500 degrees Fahrenheit or higher. Seagle’s glossy, runny, greenish glaze has been identified with Catawba Valley pottery ever since, even when other innovations came on the scene. Burlon Craig can trace his pottery education directly to Daniel Seagle. Craig taught other potters in the Catawba Valley the hard-and-fast traditional methods he learned, occasioning a renewal of interest in pottery in the area when the outlook seemed bleak. Thanks to Craig and others, the Catawba Valley remains well established as a community of potters and pottery enthusiasts.

Around 1830, North Carolina potters began to transition from earthenware to stoneware. In some areas, potters began to use salt-based glazes instead of ash-based. The new style was fired at higher temperatures and was safer to eat from because there was no lead in the glaze. The pottery was less porous and more durable. 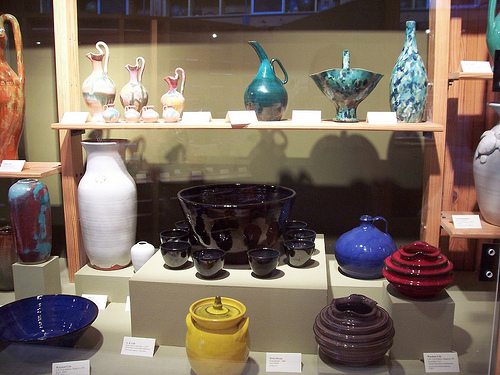 In the 1920s, the arts and crafts movement revived interest in all things rural, handmade, and homemade. Jugtown Pottery near Seagrove played a considerable role in this revival due to the enthusiasm and business acumen of its founders, Jacques and Juliana Busbee. soon moved from Raleigh to the Seagrove area specifically to strengthen pottery as an industry and an art. They saw potential in it that few others at the time did. Finding the old men unaccustomed to direction, they began working with the younger generation of potters and making aesthetic suggestions, often based on Asian pottery shapes and styles. Jacques worked on new glazes, some colorful and some subdued like the customary grays and browns. The devoted their lives to promoting the potters and pottery of the Seagrove area, not without putting their own aesthetic stamp on the newest wares. The Busbees encouraged the local potters to incorporate ancient Chinese and other Eastern pottery forms, as well as colorful new glazes. Until then, most potters used the same brown or tan colors and the simplest possible functional forms. Jugtown pottery was useful but strove to incorporate a sense of beauty and artfulness. Most pottery made since the start of Jugtown has balanced the elements of beauty and utility.

Together with their new Seagrove business partners, the Busbees brought North Carolina pottery to national attention, opening a shop in New York City and eventually their own pottery company, Jugtown, in the Seagrove vicinity. Jugtown remains the most recognizable name among Seagrove potteries. Descendants of the Busbees’ original partner, Ben Owen, still manage the pottery with a deep commitment to tradition as well as a playful willingness to innovate. Seagrove today is home to a mix of old-school traditional potters who learned from their fathers’ fathers, and trained artists, some with terminal degrees, whose medium happens to be clay. Some families have lived there since those seven original groups arrived, and many potters have moved to Seagrove hoping to be part of a thriving, clay-based community. Pottery of all types has a niche in Seagrove.