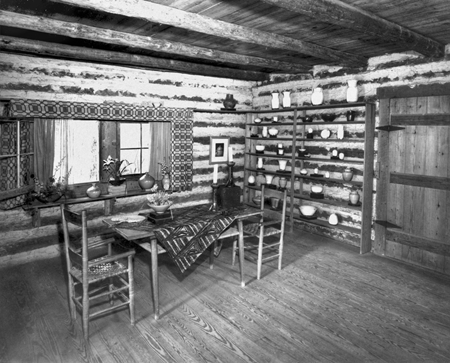 In nineteenth- and early twentieth-century North Carolina, "jugtown" referred to a number of rural, pottery-producing communities. Jugtowns were known to have existed in Buncombe, Catawba, and Moore Counties, but one particular site came to be considered the premier North Carolina jugtown.

The abundance of clay beds attracted English Staffordshire potters to the area that became Sheffield Township about 1740. Isolation and poverty insured survival of the potters' craft, and local potters produced tableware and other articles for their neighbors. In the nineteenth century, a major source of income for the Moore County potters included production of jugs for the whiskey trade. In 1921 Jacques and Juliana Busbee established Jugtown Pottery near Seagrove in Moore County. By all accounts, the Busbees, who moved to the area from Raleigh, saved the Moore County pottery industry from extinction. Jacques Busbee had studied art and design in New York City. His wife, a photographer and illustrator, had actively promoted folk crafts as chair of the art department of the Federation of Women's Clubs of North Carolina. The Busbees collected local pottery and promoted Moore County potteries. They scoured the area, searching for examples of early traditional designs. For several years the Busbees gave orders to local potters, shipped the wares to New York, and marketed the pottery at a tearoom in Greenwich Village operated by Juliana Busbee. To exert greater control over design and finish, the Busbees built the potters' shop known as Jugtown and hired and trained young potters to preserve the traditional shapes and glazes. Several Jugtown trainees later started their own potteries in the Jugtown community.

Jacques Busbee most admired the primitive and early periods of Chinese pottery, and at Jugtown he introduced "translations" of Oriental ceramics and developed a "Chinese Blue" glaze. Under his influence, the Jugtown potters produced a great number of utilitarian and decorative pieces in a wide variety of glazes.

After Jacques Busbee's death in 1947, Juliana Busbee continued to operate Jugtown Pottery with the assistance of master potter Ben Owen, who had worked with the Busbees since 1923. John Mare assumed management of the pottery in April 1959 but closed it after Owen left to establish his own pottery. Mare reopened the pottery with master thrower Vernon Owens, cousin of Ben Owen, in April 1960. Both Mare and Juliana Busbee died in 1962, ending plans for expansion. The pottery was sold in 1968 to Country Roads, Inc., a nonprofit corporation. In 1983 Vernon Owens purchased the pottery and has run it with his wife Pam Owens since then. Jugtown Pottery was listed on the National Register of Historic Places in 1999.