Juliana Royster Busbee, promoter of pottery, was the daughter of William Burt and Julia Tutt Royster of Raleigh. She attended St. Mary's Junior College for two 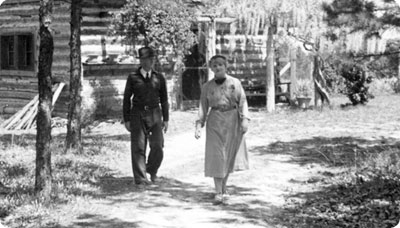 sessions and studied photography under her uncle. In 1910 she married a professional artist and illustrator, Jacques Busbee of Raleigh. In 1915, as fine arts chairman of the North Carolina Federation of Women's Clubs, she traveled throughout the state promoting folkcrafts. With her husband, she established Jugtown Pottery.

In addition to her work at Jugtown, Juliana Busbee was active in civic affairs. In 1930, as a member of the school committee in her community, she organized a school lunch program. She was a charter member and vice-president of the State Art Society and an honorary life member of the North Carolina Literary and Historical Association. On 31 May 1959, Woman's College awarded her the honorary degree of L.H.D.

After the death of her husband in 1947, Juliana Busbee and the Jugtown potter, Ben Owen, continued to operate Jugtown. Aware of her deteriorating health and failing memory, Mrs. Busbee sought help from friends and state agencies to continue operating the pottery. In 1958–59, hampered by her loss of memory, she signed two deeds to the Jugtown property: one to a committee of fifteen friends, the second to John Mare of Southern Pines. Both the committee and Mare formed corporations for the continuation of Jugtown, and both intended to provide for Mrs. Busbee's welfare. In April 1959, Mare assumed management of the pottery; however, Ben Owen—for thirty-seven years the Jugtown potter—did not approve of Mare's proposed changes and left. Jugtown was temporarily closed. Litigation between Mare's corporation, Jacques and Juliana Busbee's Jugtown, and the committee's Jugtown Incorporated began in April 1959 and was settled in December when an injunction against Mare was dissolved. During the litigation, Juliana Busbee was found to be incompetent, and P. H. Wilson of Carthage was appointed her guardian. She continued to live in her log cabin at Jugtown until her death. Following memorial services at the Busbee cabin on 5 Mar., her ashes were scattered in the yard.

Jugtown resumed operations in April 1960 under Mare's management, but his death in August 1962 cut short his plans for expansion. His executors continued operating Jugtown until they sold it in 1968 to Country Roads Incorporated, a nonprofit corporation devoted to the preservation and development of American handicrafts.

The biography of Jacques Busbee, above, for sources.