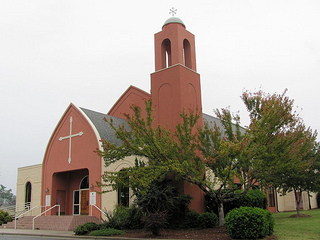 North Carolina was, for many years, home to the only Russian Orthodox Church in the South-Saints Peter and Paul, formed in 1932 in St. Helena, a small Pender County community. In that year, on land acquired from Wilmington real estate promoter Hugh MacRae, the tiny red brick church began with 15 charter members and their families. By 2006 Russian Orthodox congregations could be found in the Piedmont and Mountains as well as the Coastal Plain, in the form of Holy Trinity Orthodox Church in Durham and St. Nicholas Orthodox Church in Fletcher.