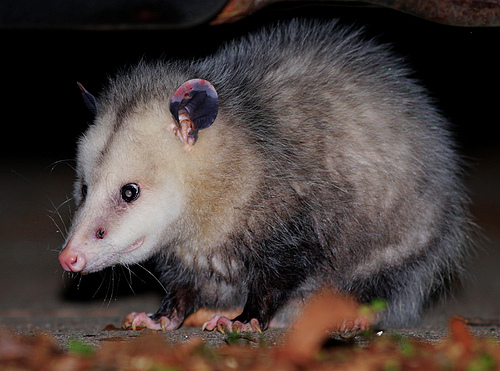 Opossums (from the Powhatan Indian word aposoun) are the only marsupials indigenous to North Carolina and the United States. Formerly trapped in great numbers for their fur, which was used for various inexpensive items, they were once confined to the southeastern and south-central United States but are now common from southern Canada to Argentina, even in cities, often becoming agricultural and household pests. The night-roaming opossum eats carrion and deals with threats by displaying its 50 sharp teeth or slipping into fear-induced catatonia ("playing 'possum").

North Carolinians of all races have shunned the opossum as unsanitary, celebrated its comas and illusory cleverness, and considered its meat to be a requisite of gracious living. The opossum hunt, customarily held under a waning autumn moon by groups of men with dogs, artificial lights, and strong drink, was once an important social event in rural areas. Some epicures still consider opossum a delicacy when the animal is taken alive, given clean food to improve its flavor, and baked with sweet potatoes. "'Possum 'n' 'taters" reached the height of respectability in North Carolina during the gubernatorial administrations of William Kerr Scott (1949-53) and his son Robert Walter Scott (1969-73). From 1970 to 1973 the National Hollerin' Contest in Spivey's Corner included a "Prettiest Possum" competition. Public outcry saved the first winner, Slowpoke, from the gubernatorial table. 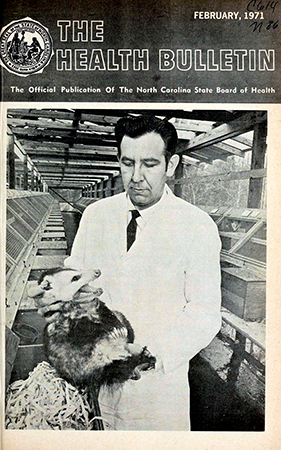 Cover of The Health Bulletin 86. No. 2. February 1971. North Carolina State Board of Health. https://archive.org/stream/healthbulletinse86nort#page/n21/mode/2up