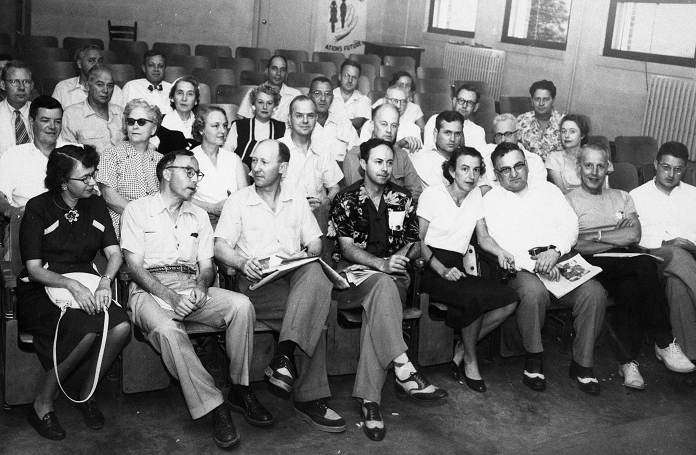 The North Carolina Writers Conference (NCWC), the oldest general organization of writers in the state, was inspired by a suggestion by novelist Inglis Fletcher and an invitation from publisher Lambert Davis for writers "to meet informally and discuss the problems we share," following a performance of Paul Green's outdoor drama The Lost Colony in Manteo on 8 Aug. 1950. Attending the first meeting, and therefore eligible to be called founders, were important North Carolina literary leaders Fletcher, Davis, Green, Paul Ader, Huntington Cairns, Chalmers G. Davidson, Brennan Fagan, John Harden, Gerald Johnson, Josephine Niggli, John Parris, William T. Polk, William Meade Prince, Marian Sims, Betty Smith, and James Street. Others, such as Walter Spearman and Richard Walser, were involved in the planning but were unable to attend the initial meeting. Davis reported that the discussion covered shoptalk, craft talk, and true confessions.

Although the group voted to meet again, it was adamant in wanting neither a formal organization nor an apostrophe in its name. Deciding which North Carolina writers merited an invitation to join the group proved difficult, and Davis, Fletcher, Parris, and Spearman were charged with preparing a list of invitees; under no circumstances were they to call themselves a committee, however. The group's rejection of a bureaucratic structure has remained one of its guiding principles. It has never had a constitution, bylaws, an annual report, or a president. Inevitably, however, someone had to mail invitations and make local arrangements. Accordingly, a chair, a vice chair, and a secretary-treasurer were eventually chosen. The group has shied away from publicizing itself, and except for two issues of a newsletter duplicated by Doris Betts in 1956, the conference produced no publications of its own. The membership selection process was always shadowy, but keen observers in the 1960s began to credit anointment by Sam Ragan, who by then was called the "godfather" of the conference. In the early years, meetings often were held alternately in the western and eastern parts of the state, but as attendance increased, Raleigh, Chapel Hill, and Southern Pines frequently hosted the meetings.

Beginning in 1977, NCWC honored a North Carolina writer every year at its annual banquet (except for 1999, when the conference returned to Manteo for a special fiftieth meeting.) Recipients of this honor have included Green, Jonathan and Lucy Daniels, Thad Stem, Reynolds Price, Fred Chappell, Burke Davis, Wilma Dykeman, John Ehle, H. G. Jones, John Foster West, Daphne Athas, John Hope Franklin, Shelby Stephenson, and Roy Parker Jr. Speeches made during these award banquets usually were published in Pembroke Magazine. A current membership roster of the NCWC is maintained by the curator of the North Carolina Collection at UNC-Chapel Hill. Fifty Splendid Summers: A Short History of the North Carolina Writers Conference, 1950-1999, compiled by Charles Blackburn Jr. and Robert G. Anthony Jr., was copublished in 1999 by the NCWC and the North Carolina Collection, with financial support from the Paul Green Foundation.