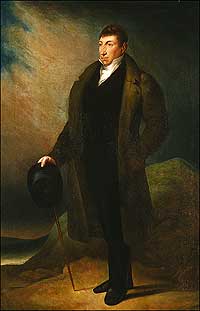 As an official guest of the United States in 1824 and 1825, the Marquis de Lafayette, at age 68, planned to remain in the northern and middle Atlantic states, avoiding extensive travel. But after being repeatedly pressed by southern legislatures and governors, including those of North Carolina, the French general yielded in early 1825 and agreed to make a 5,000-mile tour of the South.

As the foremost living symbol of America's success in the Revolution, Lafayette could expect to be feted extravagantly at every stop. It would nevertheless be a harrowing journey since most of the time he would travel by carriage over poor roads. In particular, the road from Richmond, Va., to Raleigh was "so broken" that he was obliged, as he wrote to Thomas Jefferson, "to take the sandy Lower Road by Suffolk and Halifax." Raleigh had received such late notice of the general's trip that no official welcoming party reached him until he was at Northampton Courthouse (modern Jackson). After appropriate salutations, the party, including seven carriages of delegates from Raleigh under Attorney General Beverly Daniel and Chief Justice John Louis Taylor, proceeded to Halifax. Lafayette spent the evening at the Eagle Hotel and, before leaving town the next morning, visited about an hour at the home of Mrs. Willie Jones (widow of the former governor), who was attended by her daughter, the wife of Governor Hutchins Burton.

The route from Halifax continued through the village of Enfield, across Falls of Tar River near Tarboro, and to Col. Allen Rogers's Tavern at Rogers Crossroads in eastern Wake County. Here the party spent the night of 28 Feb. 1825 before moving on to Raleigh. Lafayette was met at Crabtree Bridge and conducted by military escort to the Governor's Mansion. Highlights of the overnight sojourn included a viewing of Canova's statue of George Washington at the capitol, which the general pronounced a good likeness, and a ball with 150 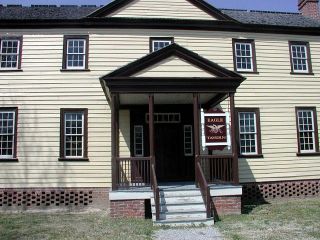 ladies present. Leaving Raleigh on the morning of 1 March, Lafayette and his entourage reached his namesake town Fayetteville that afternoon. He was feted at a ball at the Lafayette Hotel in the evening and was an overnight guest of merchant and postmaster Duncan MacRae. After an afternoon banquet the next day, he left for South Carolina.

No event in the state's history had received such newspaper coverage or universal outpouring of public adoration as Lafayette's visit. Huge crowds greeted him everywhere, packed his reception rooms, and trooped along with him wherever he rode or walked. Reams of poetry were written, songs composed, commemorative knickknacks sold, and Revolutionary War episodes recounted. Military units came from coastal points and from as far west as Charlotte to form part of the general's escort at Raleigh and elsewhere. There appeared to be a palpable awareness that this would be the last direct link Americans could hope to experience with the leadership of the struggle for independence.

Banquet for Lafayette held at the Eagle Tavern, Halifax, NC. Image courtesy of the State Archives of NC. Available from https://www.ncdcr.gov/about/history/division-historical-resources/nc-highway-historical-marker-program/Markers.aspx?ct=ddl&sp=search&k=Markers&sv=E-68%20-%20EAGLE%20TAVERN (accessed August 1, 2012).