Part 2: Early Labor Movements and Conflicts in the Textile Industry 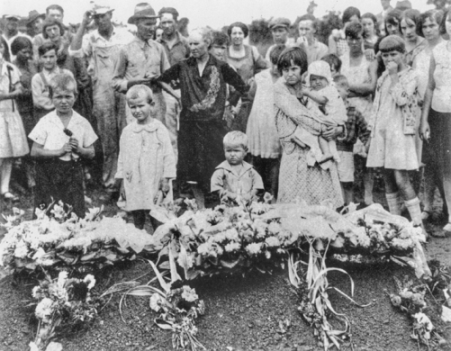 The American Federation of Labor (AFL) began organizing efforts in North Carolina in 1898, specifically targeting the growing textile industry. Women and children as well as men worked in textile mills, often under dangerous and unhealthy conditions. The AFL's goals were compulsory education for children, child labor laws, use of the strike as a bargaining weapon, a national eight-hour workday, and a protective tariff. The AFL made little progress organizing workers due to opposition by manufacturers and negative attitudes among laborers.

In 1887 a state Bureau of Labor Statistics, precursor of the Department of Labor, was created to compile statistics, issue reports, and make recommendations on labor issues. A permanent labor organization, the North Carolina State Federation of Labor, was formed by about 1,000 delegates from local unions statewide in Raleigh's Odd Fellows Hall on 18 Oct. 1905. The Raleigh Central Labor Union (CLU), formed on 7 Aug. 1900 by representatives from locals for the printing trades, machinists, and bookbinders, appears to have been the main force behind this federation. Within its first year, the CLU had organized retail clerks, painters, musicians, and cigar makers in the state. The CLU and other organizations such as the Charlotte Building Trades Council, the Allied Printing Trades Council in Raleigh, and trade union locals of skilled workers were thus in a position to take the lead in the formation of a statewide federation.

From 1905 to World War I, there were no major unionizing activities in the state. The war spurred efforts to organize southern industrial laborers in the tobacco, furniture, and textile industries. In 1919 the United Textile Workers Union (UTW), an affiliate of the AFL, organized thousands of workers in a series of strikes, the largest of which took place at the Highland Park plant in Charlotte. After three months, Governor Thomas W. Bickett intervened to pressure both management and the union to negotiate a settlement that restored wages, reduced hours, and secured a promise that the mill owners would not "discriminate against any person on account of organization affiliation." For the next two years, management and striking workers engaged in a tense confrontation, with mill owners determined not to recognize collective bargaining and workers desperately trying to sustain economic gains made during the war years. The economic woes of 1921 quickly ended the strikes and lockouts. The mills restored wage levels, and workers dropped their demands for bargaining rights.

Significant labor activity returned to North Carolina in 1929, when many textile workers in the Gastonia-Marion area, discontented with lagging wages and unsatisfactory working conditions, responded to the organizing efforts of Fred E. Beal of the radical National Textile Workers Union (NTWU). Several NTWU unions were formed and organized the notorious Gastonia strike at Loray Mill. The violence associated with the strike left two people dead and drew international attention. The ultimate failure of the unionization attempt amounted to a major setback for the labor movement and sparked rampant opposition to organizing efforts across the South.

Keep reading >> Labor Unions- Part 3: The General Strike of 1934 and the Battle for Union Leadership

Leon Fink, The Maya of Morganton: Work and Community in the Nuevo New South (2003).

The children of Ella Mae Wiggins, a union supporter killed during the 1929 Gastonia strike, stand beside their mother's grave on the day of her funeral. North Carolina Collection, University of North Carolina at Chapel Hill Library.