"It's a Damn Long Time between Drinks" 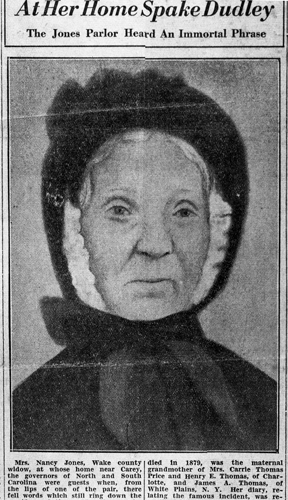 "It's a Damn Long Time between Drinks" is the famous statement allegedly made by North Carolina governor John Motley Morehead during a tense visit from South Carolina governor James H. Hammond in the 1840s. While in the midst of a long and heated argument, Morehead supposedly uttered the phrase, which had the effect of lessening the hostilities and restoring good will between the two men. Another possible origin of the quotation dates to 1838, when North Carolina governor Edward B. Dudley purportedly said it while he and South Carolina governor Pierce Mason Butler were taking refreshments at the Nancy Jones House on a trip between Raleigh and Chapel Hill. North Carolina author Thomas Wolfe's Of Time and the River (1935) contains an allusion to the phrase in a scene in which the protagonist sits in an English pub: "Eugene's glass was almost empty and he looked at it, and wondered if he ought to have another. He thought they made them very small, and kept thinking of the governors of North and South Carolina."

The quotation has been used at least since 1891 as a catchphrase for any long and tedious process. It acquired new meaning and renewed popularity after 1933 when, despite the repeal of national Prohibition, selling liquor by the drink remained illegal in both North Carolina and South Carolina. Railway passengers traveling from Washington, D.C., to Atlanta found themselves faced with "a long time between drinks" because of the train's closed bar.

Eric Partridge, A Dictionary of Catch Phrases, British and American, from the Sixteenth Century to the Present Day (1986).

Dixon, George. "History Can Be Hard on the Furniture!" The Milwaukee Sentinel. February 14, 1953. http://news.google.com/newspapers?id=lkMxAAAAIBAJ&sjid=EhAEAAAAIBAJ&pg=5866%2C4991516.

Newspaper article about Nancy Jones with her portrait. Call no. ConDev63-386A. Image courtesy of the State Archives of North Carolina.

The expression is also found

The expression is also found in 'The Wrong Box', (1889) by Robert Louis Stevenson, Chapter VIII