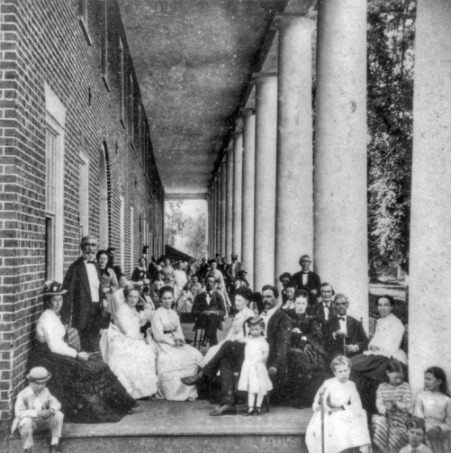 Hot Springs is a small North Carolina community tucked deep into the Appalachian Mountains of western Madison County. The warm thermal springs after which the town was named, though known to Indians in the area, were first discovered by whites in 1778 near the banks of the French Broad River. A proposed community called Warm Springs Colony was created by the Western North Carolina Co-operative Manufacturing and Agricultural Association of New York City in 1870-71. The stockholders, with Dwight S. Elliott as president and Hinton Rowan Helper as a booster, sought to establish two colonies-one for manufacturing, one for agriculture-on a tract owned by James H. Rumbough on the French Broad River in Madison County. A Raleigh Episcopal rector said he had heard that 1,000 bushels of white potatoes could be grown per acre in the surrounding rich soil, which also was suited for corn, wheat, cranberries, apples, medicinal herbs, and root crops.

Predicting that the area would become the "New England of the South," the organization advertised for hundreds of farmers and workers skilled in wood, iron, and stone, each to own one share in the association. A local hotel was to be used as housing until individual homes could be built. The proposed hotel lease, however, fell through, and little is known about the colonists who actually came to Warm Springs.

The community's name was changed to Hot Springs in 1886 and the town incorporated three years later. The warm, mineral-rich water that rises to the surface from a geologic fault is the linchpin to the past and present of the town of Hot Springs. A tavern built near the springs served drovers and travelers in the late 1700s and was a regular stopping place as early as 1803 for Francis Asbury, the first bishop of the Methodist Church in the United States. The old tavern gave way to the first resort on the site, the Warm Springs Hotel, where a young Zebulon B. Vance, later governor of North Carolina during the Civil War, clerked. 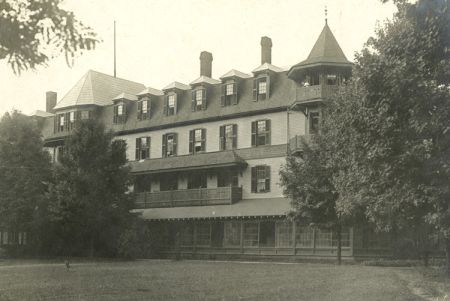 While the development of Hot Springs and the success of the Warm Springs Hotel in the early 1800s were assured by its prime location on a stagecoach line, its status as a resort destination came with the advent of rail service. With new owners, the hotel was renamed the Patton Hotel in the 1830s. By the late 1800s, the Patton Hotel had evolved under the ownership of James Edwin Rumbough into the grand Mountain Park Hotel. Beyond the cool summer temperatures and luxurious accommodations, the hotel offered hot mineral bathing, tennis, equestrian sports, fine dining, dancing, music, and golf at the Wana Luna Golf Club, North Carolina's first organized golf club. The hotel and grounds were leased to the United States during World War I at the rate of $1,500 per month. The government converted the hotel, its grounds, and the golf course into a civilian internment camp for German merchant marines. The internees passed the time by constructing a village reminiscent of their Bavarian homes, participating in a band, and building a fully operational carousel, complete with a scene of German merchant ships plying the Atlantic. The structures built by the Germans at Hot Springs were blown up by guards in celebration of the signing of the armistice, and the Mountain Park Hotel was destroyed by an arsonist in the early 1920s, never to be rebuilt.

The rare geologic features that led to the founding of Hot Springs by early white Americans also drew Native Americans in an earlier time. Prior to discovery by white settlers in the late 1700s, the area was significant in Cherokee Indian culture not only for the rare warm mineral springs but for outcroppings of rock along the banks of the French Broad River. Only a short distance upriver from Hot Springs is a high rock outcropping that commands views of the entire town and surrounding valley. Located in the Pisgah National Forest and on the Appalachian TrailAppalachian Trail system, the rock outcropping is known as "Lover's Leap." It is there that a Cherokee maiden named Mist-on-the-Mountain, a daughter of Lone Wolf, is purported to have leapt to her death upon hearing the news of the death of her lover Magwa at the hands of the jealous brave Tall Pine, who was soon thereafter killed by a panther.

Only a few miles downstream from Hot Springs is another significant rock outcropping known as Paint Rock, which is only yards away from North Carolina's border with Tennessee. Paint Rock, like Lover's Leap, appears to have been significant in Cherokee culture. Its name is derived from figures painted on the rock face (by Cherokee Indians, early settlers believed), which are now almost indiscernible. Paint Rock was the site of a blockhouse used to protect settlers from Indians and was the location of the former town of Paint Rock, which was incorporated for a brief period in the late 1800s.

While the springs were reopened in the 1980s, Hot Springs is no longer a resort destination; it remains a small community surrounded by a national forest, attracting tourists and campers.