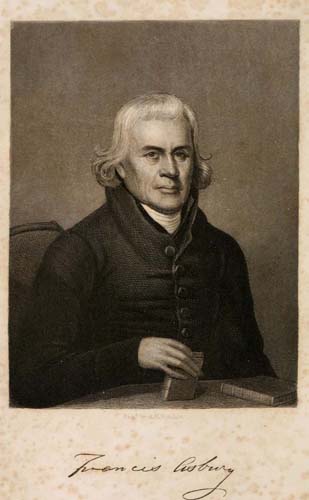 Francis Asbury, first bishop of American Methodism, was born in Handsworth, Birmingham, England, the only son of Joseph and Elizabeth Asbury. He completed only eight years of formal education. At the age of twelve, in his words, "the Spirit of God strove frequently and powerfully" over him. When he was between seventeen and eighteen, he began to exhort and preach; he traveled in Staffordshire, Gloucestershire, Bedfordshire, Sussex, Northampton, and Wilshire.

Asbury, a lay preacher, went to America for missionary work in 1771 at the assignment of John Wesley (1703–91), founder of Methodism. For the next half century, he traveled 270,000 miles, preached 16,425 sermons, presided over 224 conferences, ordained 4,000 preachers, and helped Methodism outstrip the growth of population five to one. Francis Asbury, "the Prophet of the Long Road," traveled some six thousand miles annually, ever extending the boundaries of his labors, until they reached from Maine to Georgia and westward to Ohio. He was one of the best-known men of his day and one of the most often seen. His almost ceaseless, though not haphazard, activity earned him the epithet "Bishop of North America."

In 1951, the National Historical Publications Commission of the U.S. government included Asbury among the sixty-six great Americans whose works the body recommended for proper editing and publication, along with Washington, Jefferson, and Adams. His letters and his journal, begun in 1771 and ended in 1815, have been published in three volumes.

At the Christmas conference—the organizational meeting of the Methodist Episcopal Church in America—held on 24 Dec. 1784 at Lovely Lane Chapel in Baltimore, Asbury, then thirty-nine years old, was ordained first deacon, then elder, and then bishop in three consecutive days. He was the first bishop to be consecrated in the new denomination in America. Bishop Thomas Coke, appointed by Wesley, shared the leadership, but he gave his efforts primarily to other fields. Among other duties, Asbury and Coke called on Washington soon after his election to the presidency.

Asbury went to North Carolina first in 1780 and last in 1816. The celebrated circuit rider visited the state seventy-two times but left no account of his final visit. Some visits were for a few days, although others lasted several weeks. Seldom did he travel alone; traveling companions appointed by the conferences included Henry Boehm, John Wesley Bond, John Crawford, Tobias Gibson, Henry Hill, Hope Hull, Jesse Lee, Stith Mead, Thomas Morrell, Joel Smith, Nicholas Snethen, and Humphrey Wood. Bishops Thomas Coke, Richard Whatcoat, and William McKendree each made some visits with him. In North Carolina he traveled by horseback and by wheeled contrivances: carriages, a little Jersey, wagon, chaise, and gig; there are no references to stagecoaches.

Asbury lifted up "the trumpet of the Lord" in a great variety of places. Congregations ranged from small to very large; at the conference in Raleigh in 1811 some two thousand were present. He preached in the courthouses of Anson, Beaufort, Buncombe, Camden, Chowan, Edgecombe, Gates, Hertford, Lenoir, Martin, Northampton, Pasquotank, and Sampson counties. He also presided at quarterly meetings, societies, and classes, encouraged Bible reading and study, held watch-night services and love feasts, baptized converts, and recruited men into the itinerant ministry. From his saddlebags he constantly distributed books and pamphlets to encourage education in the wilderness.

Asbury never retired, never returned to his native land and, because of the nature of his itinerant work, never married. He died in Spotsylvania County, Va., and was interred there. Soon thereafter, his body was removed to the vault at Eutaw Street Church in Baltimore, virtual headquarters of American Methodism. In 1854 his body was reinterred in the Lord's Acre in Mt. Olivet Cemetery in Baltimore, near the graves of Robert Strawbridge, Reuben Ellis, Wilson Lee, John Haggerty and Bishops Beverly Waugh and Enoch George.

For more on Asbury's time in

For more on Asbury's time in England before coming to America, visit the website for the book series, The Asbury Triptych, at www.francisasburytriptych.com. Enjoy the numerous articles, podcasts, videos, pictures, and character profiles from the first book in the series, Black Country. Black Country features Asbury's young ministry years in England before coming to America for the remaining 45 years of his life.