Hog farming, an important part of North Carolina agriculture since colonial days, has grown into a massive industry with a gross value in excess of $2 billion annually. In the latter years of the twentieth century, it also represented a significant environmental problem, with the dangers of hog lagoons-which store hog waste for later use as fertilizers-consistently threatening water supplies and raising health concerns in several hog-producing counties. 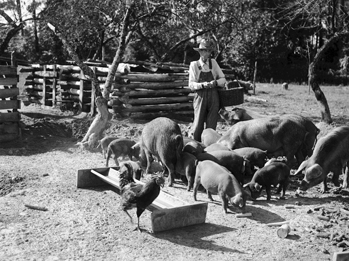 Purebred hog breeds played a major role in upgrading the quality of hogs in the state and have continued through the years to be the primary source of breeding stock. The Berkshire breed appeared in North Carolina in 1881, when John O'Hagan of Wilson brought a boar from Maryland. In the late 1880s Julian S. Carr was declared the first constructive Duroc Jersey breeder in the state. Chester Whites came to North Carolina in 1898, and by 1910 there were Tamworths, Hampshires, and Yorkshires. More than 10 purebred swine breeders have been inducted into the North Carolina State Fair Livestock Hall of Fame, which was established in 1980.

North Carolina has supported its hog farming industry in several ways. In 1918 W. W. Shay moved to Raleigh to head swine extension. During the next 14 years his work with "Result Demonstrations" gained him a reputation as the "father" of the North Carolina commercial swine industry. In 1961 a Swine Evaluation Station was established to encourage producers to collect and use performance data in selecting breeding stock, and in 1962 the North Carolina Pork Producers Association, Inc., was chartered for promotion, research, and education. The Swine Development Center near Rocky Mount was built in 1965 to demonstrate the finer points of swine production. In the late 1970s as many as 200,000 feeder pigs moved through 10 organized quality and graded feeder pig sales annually. By the early 1980s the state gained the distinction of having more large herds than any other state. In 1989 North Carolina had 70 herds with more than 1,000 sows each, and Sampson County was the top-ranked county in the nation for hog production.

After years of fluctuating numbers, hog populations in North Carolina began to increase dramatically during the 1990s, accompanied by a dramatic decrease in the number of hog farms in the state. Most hog farms are in the southeast, especially Sampson, Bladen, Robeson, and Duplin Counties. The growth of "mega farms" owned by large corporations has been a key development of the hog farming industry. Major companies such as Smithfield, Tyson, Swift, and Hormel have massive operations in North Carolina, at times drawing the ire of health professionals for the poor working environments of their employees.

By the 1990s, disposal of waste produced by hog farming became a major issue in the state. The most common practice for disposing of the waste was placing it in lagoons-large basins where it could decompose and wastewater could be filtered and purified before returning to the groundwater system. But there was no uniform standard for these lagoons, and with the growth of large hog farms, area residents increasingly complained about their odor and worried about the danger of contaminants leaking into water supplies for human consumption. A law stipulating the safe location of hog lagoons-at least 1,500 feet from homes and 2,500 feet from schools, hospitals, and churches-was enacted in 1995. The Clean Water Responsibility Act, passed by the General Assembly in 1997, placed a moratorium on the construction of new farms with more than 250 hogs, halting the growth of the industry. But two years later, Hurricane Floyd's heavy rainfall caused the overflow of many North Carolina hog waste lagoons, creating massive contamination of several watersheds. The moratorium on new lagoons was renewed in 1999 and was further extended in 2003 through the efforts of Governor Michael Easley. Today's hog processors, researchers, and environmental engineers continue work on improving methods for waste disposal in the industry.

Despite restrictions on hog production, by the early 2000s North Carolina ranked second nationally in swine production behind Iowa and was the largest swine state outside the traditional Corn Belt. Modern hogs are lean and muscular, and most are raised in confinement. They are sired in a breeding barn, born in a furrowing house, grown in a nursery, and "topped out" in a finish facility. Market weight is 210 to 250 pounds at five to six months of age.