The Great Migration and North Carolina 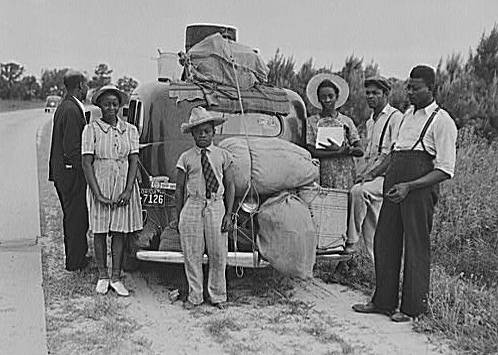 In 1914 Bessye and Howard Bearden, of Charlotte, had a decision to make. Should they stay in North Carolina and face increasing discrimination and violence in the South, or should they move to an unknown life in the North? Their dilemma was a familiar one for southern blacks. As the decades of the late 1800s and early 1900s passed, thousands of African American families made the same decision to leave their home state of North Carolina in search of a better life. Like the Beardens, they moved north.

In the years after the Civil War, formerly enslaved people throughout the South temporarily enjoyed freedom and new opportunities. Politicians reached out to blacks, hoping to get their votes. Black leaders rose to power, and lawmakers respected the rights of African American citizens. But after 1876, southern politicians began to turn against blacks. The Ku Klux Klan intimidated African Americans and helped bring to power leaders who believed in white supremacy.

For a while, white North Carolinians ignored this trend. But in the mid-1890s, whites chose Furnifold M. Simmons as the state chair of the Democratic Party. He and his supporters were determined to put blacks “in their place” through intimidation and discrimination. When a group of Wilmington whites rioted in 1898, they killed and injured dozens of African Americans and chased hundreds out of the city. Rioters forced black officials, including the mayor, out of office.

From that point on, North Carolina blacks rapidly lost power in government and society. Lawmakers passed “Jim Crow” laws that prevented blacks from voting (disfranchisement) and separated them from whites (segregation). African Americans faced housing and job discrimination and an unfair legal system. And although blacks in other states faced more frequent aggression, violence toward African Americans in North Carolina increased in the 1890s and early 1900s.

The state was becoming economically unfriendly to blacks as well. Sharecropping had been a dead end for white and black farmers since the 1880s. Although the growing textile industry offered desirable jobs, they were for whites only. Poor whites were even taking jobs usually held by blacks. More and more African Americans found themselves out of work or struggling to make ends meet.

Not surprisingly, African Americans began leaving, and most of them headed north. By 1915 the migration of blacks went up dramatically due to World War I. The fighting in Europe increased factory orders in northern cities. When America joined the war in 1917 and sent soldiers overseas, war production rose, but the number of available factory workers fell. Carolina blacks welcomed the chance for good jobs with less discrimination.

As blacks moved north in this “Great Migration,” they created communities within cities. It was not uncommon to find entire blocks of families from one southern state. Many North Carolinians moved to Harlem, the center of black life in New York City. During the “Harlem Renaissance” of the 1920s, African American art, literature, and music flourished. It was in this environment that young Romare Bearden grew up, surrounded by a large group of African Americans from his home state as well as from other areas of the South and the Caribbean.

Back home, the South was struggling. With their workforces dwindling, some states took drastic measures to keep black laborers “down on the farm.” Southern sheriffs pulled African American migrants off northbound trains and arrested labor agents who promoted northern jobs. Officials banned newspaper ads featuring opportunities in the North.

Because many of the state’s black migrants had written home praising their new lives, North Carolina faced a serious labor shortage by 1920. The newly formed Division of Negro Economics wrote a report about the issue of black migration. The committee determined that one way to keep African Americans in the state was to provide them with a better lifestyle. Its report suggested improvements in working conditions (clean facilities and better pay); in living conditions (modern homes, electricity, and sewers); and in communities (schools and hospitals).

Committee members also strongly encouraged whites to improve race relations as a way to stop black migration. North Carolina’s white employers and politicians realized that it was vital to keep the remaining black workers. Although many whites did not change their own attitudes toward blacks over the next decades, they did make some attempts at improving working and living conditions for African Americans.

But life for southern blacks who moved to the North was not necessarily better. Poverty and discrimination existed on both sides of the Mason-Dixon Line, but so did joy and inspiration. Romare Bearden grew up in Harlem, surrounded by intellectual and artistic figures like Duke Ellington and Langston Hughes. But he also frequently returned to North Carolina, where he cherished the sounds of southern spiritual hymns and the sights of women working in the fields. His art drew from his new life in the North as well as his love of the South. Later, after he became a world-renowned artist and activist, Bearden would say that he “never left Charlotte except physically.”

Many other African Americans felt the same way. Although they remained in the North, many men and women, like Romare Bearden, continued to love the South. Recent census reports show that more and more black Americans are returning south. Although blacks fled North Carolina during the Jim Crow era, their descendants have increasingly returned in the wake of the Civil Rights movement. Since the 1970s, more African Americans have moved into the state than out. And in the last decade, North Carolina has been one of the most popular states in this reverse black exodus.

At the time of the publication of this article, Dr. Shepherd W. McKinley is a lecturer at the University of North Carolina at Charlotte, where he teaches North Carolina history and heads the History Department’s educational outreach efforts. Cynthia Risser McKinley is a children’s author whose work has been published in Cobblestone, Appleseeds, and Highlights magazines.