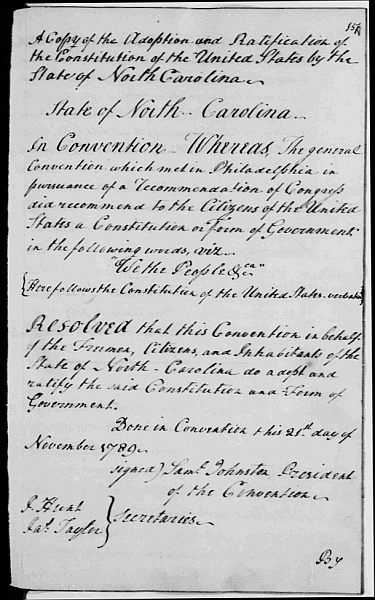 During the years between the Revolutionary and Civil Wars, North Carolina developed a system of state and local government to meet the needs of its people. A constitutional convention was held in 1835, and among several changes made in the constitution was the method of electing the governor. After this change, the governor was elected by the people for a term of two years, instead of being elected by the legislature for one year. Edward Bishop Dudley was the first governor elected by the people.

In 1868, a second constitution, which drastically altered North Carolina government, was adopted. For the first time, all major state officers were elected by the people. The governor and other executive officers were elected to four-year terms, while the justices of the supreme court and judges of the superior court were elected to eight-year terms. The members of the General Assembly continued to be elected for two-year terms. Between 1868 and 1970 numerous amendments were incorporated into the 1868 constitution, so that, in 1970, the people voted to adopt a completely new constitution. Since then,several amendments have been ratified, but one in particular is a break from the past. In 1977, the people voted to allow the governor and lieutenant governor to run for reelection successively for an additional term.

North Carolina has had two permanent capitals, New Bern and Raleigh, and there have been three capitol buildings. Tryon Palace in New Bern was constructed in the period 1767-1770, and the main building was destroyed by fire February 27, 1798. The first capitol in Raleigh was completed in 1794 and was destroyed by fire on June 21, 1831. The present capitol building was completed in 1840.

"North Carolina, like other Southern states, relied on slavery to build its economy during the 18th and 19th centuries. Slaves across the state raised crops, did domestic chores, constructed new buildings, sailed ships, and performed countless other jobs, all for no pay. The slave trade separated many families, and punishment and violence were all too common. Despite the extreme hardship of slavery, enslaved blacks in North Carolina created a strong culture that combined their experiences as slaves with elements of African and West Indian traditions." (From the University of North Carolina at Chapel Hill's The Story of Slavery in North Carolina. To read and listen to stories of slavery in North Carolina and to view educator and student guides on the topic visit the site: http://www2.lib.unc.edu/stories/slavery/index.html)

In 1790, North Carolina ceded her western lands which included Washington, Davidson, Hawkins, Greene, Sullivan, Sumner, and Tennessee counties, to the federal government. Between 1790 and 1796 the territory was known as Tennessee Territory, but in 1796 it became simply the State of Tennessee, the sixteenth in the Union.

i am not sure how i feel

i am not sure how i feel about slavery, on one hand, i think it is wrong to own someone, but on the other hand, free labor. so you have your opinion.