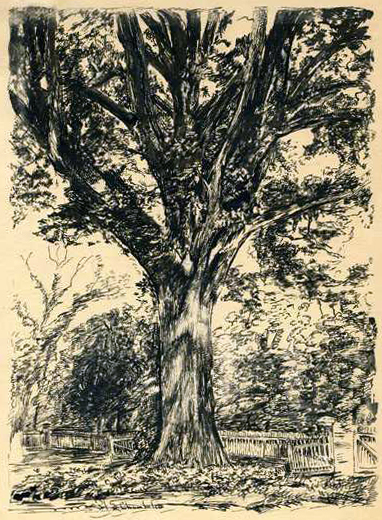 The Henry Clay Oak, a venerable white oak of unusually large height and girth, stood in Raleigh near the northwest corner of the intersection of North Blount and East North Streets from a time possibly predating the city's 1792 founding until 1991. The tree grew to a height of more than 100 feet, with a 100-foot spread and a trunk diameter of 6½ feet. It typified the type of tree that early North Carolina settlers used for building homes and other structures, as well as making furniture and farm implements. The bark was equally useful for tanning leather.

The name "Henry Clay Oak" derives from local tradition, which holds that in 1844, under the shade of this tree in the side yard of the residence known as the William Polk House, Whig presidential candidate Henry Clay penned his famous "Raleigh letter," which supposedly cost him the presidential election. On 17 April of that campaign year, he wrote the widely read letter opposing annexation of Texas, an action he predicted would precipitate war with Mexico.

Weather damage and irreversible disease necessitated the tree's destruction on 9 Oct. 1991. A bronze marker that had been erected in 1939 by the Colonel Polk Chapter, Daughters of the American Revolution, marks the former location of the tree. An unofficial count of the rings suggested an age nearer to 200 years than to several earlier estimates varying between 250 and 600 years. The landscape services section of the State Department of Administration germinated seedlings from the tree soon after it was felled and provided one seedling to each of the 100 schools in Wake County, with instructions for planting the seedling on the school grounds. Woodcarvers made Henry Clay Oak souvenirs from the felled tree, including a reproduction acorn fashioned by Darrell Rhudy, a member of the Triangle Woodturners of North Carolina. The acorn was deposited in Raleigh's bicentennial time capsule on New Year's Eve 1992.