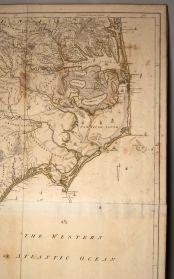 The Great Trading Path, or the Occaneechi Path, was one of many Indian trails in use when the English first explored the North Carolina backcountry during the late seventeenth century. Before recorded history, the trail likely existed as a series of minor, shorter footpaths that linked the many small villages scattered across the Piedmont landscape. However, with the establishment of a fur trade between Virginians and the Catawba, Cherokee, and neighboring Siouan tribes during the 1670s, it quickly became the primary route of travel and commerce across the North Carolina Piedmont. For about 30 years, the trail was traveled by Virginia traders whose lengthy pack trains brought European manufactures such as metal tools, cloth, blankets, trinkets, firearms, ammunition, and rum to the native population. On the return trip, their horses carried deerskins and furs bound for markets in Europe.

Knowledge about the location of the Great Trading Path and the Indian villages along it comes primarily from two sources. First, they are recorded in the journals and accounts of those who actually journeyed along the trail, such as John Lederer in 1670, James Needham and Gabriel Arthur in 1673, and John Lawson in 1701. These accounts provide a firsthand glimpse into the cultural and physical geography of the trail. Second, because of the trail's prominence in the fur trade and the fact that it was later transformed into a wagon road (after the mid-eighteenth-century arrival in the Piedmont of immigrants of English, German, and Scotch-Irish descent), it has been preserved on several colonial maps of North Carolina, such as those by Edward Moseley in 1733, John Collet in 1770, and Henry Mouzon in 1775.

The Great Trading Path ran southwestward from Fort Henry (now Petersburg, Va.) to Occaneechi Island (at Clarksville, Va.), where the Occaneechi tribe resided and acted as middlemen in the trade during the 1670s. From there the trail ran southward into North Carolina, crossing the Tar River near Oxford. After the Occaneechi tribe's defeat during Bacon's Rebellion of 1676, this segment of the trail was abandoned for a more easterly route that crossed the Roanoke River at Moniseep Ford near the North Carolina-Virginia line. From Oxford, the trading path ran southwest toward present-day Charlotte, crossing the Flat and Little Rivers north of Durham, the Eno River at Hillsborough, the Haw River near Swepsonville, the Uwharrie River west of Asheboro, and the Yadkin River at the Trading Ford near Spencer. From the Trading Ford, the trail turned south toward the populous Catawba and Waxhaw villages on the Catawba River below Charlotte. From the Catawba, trails ran both westward toward the Lower Cherokee and southward to the Congaree River (near Columbia, S.C.) and Augusta, Ga., trading posts.

North Carolina Indian tribes whose villages were located along or near the Great Trading Path during the late 1600s and early 1700s include the Saponi and Tutelo (at the Trading Ford), the Keyauwee (on Caraway Creek), the Sissipahaw (along the Haw River), the Occaneechi and Shakori (on the Eno River), and the Eno (on the Little and Flat Rivers).

Clarence W. Alvord and Lee Bidgood, The First Explorations of the Trans-Allegheny Region by the Virginians, 1650-1674 (1912).

I was told that I'm named

I was told that I'm named after my great, great , great grandmother "who was a legend in her time". She was involved with a trading post near Ashville or Morganton, NC. according to a deceased relative. Do you have any knowledge of that trading post and person with the first name "rebecca." Thanks, Rebecca King