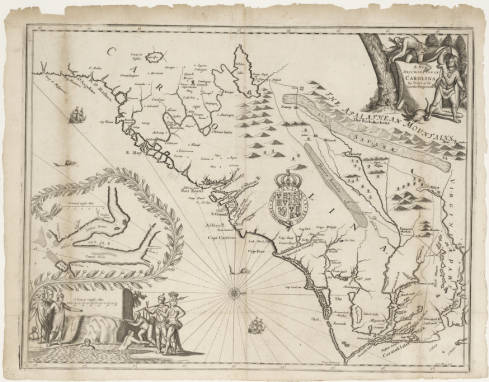 Johann (or John) Lederer, German physician and pioneer explorer of the Virginia Blue Ridge and Carolina Piedmont, was born about 1644, the son of Johann Lederer of Hamburg. He matriculated in the Hamburg Academic Gymnasium on 18 Apr. 1662. By 1670 Lederer was in Virginia. Governor William Berkeley, who with other contemporaries believed that the Pacific was not far beyond the "hills" west of the settlements, commissioned him to make explorations westward in the hope that Virginia might become the intermediary in carrying the wealth of the Indies to Europe.

On 19 Mar. 1670 Lederer reached the Blue Ridge northwest of present Charlottesville but found neither a pass nor the "South Sea." On his second "march," leaving Stegge's plantation (present-day Richmond) on 20 May 1670 with a Susquehanna Indian as guide, he reached Akenatzy (Occaneechi Islands near present-day Cartersville on the Staunton River) and continued southwest across the Yadkin ford near Spencer, N.C., through the Uwharrie Mountains to the Catawba River, probably near Rock Hill, S.C. Fearful of enslavement by Spaniards, he then returned by a more easterly route, reaching Appomattox (Abraham Wood's trading post) on 20 July 1670. This important, influential journey helped open the great Indian Trading Path (now roughly followed by Interstate 85) to the lucrative Virginia fur trade that flourished with the Catawba and Cherokee for several decades.

Lederer was a perceptive observer of the Indian settlements that he encountered; his comments on the location, customs, and beliefs of the Indian tribes are generally astute and ethnologically valuable. Unfortunately, his later published account with its accompanying map gives three geographic misconceptions: he describes the Piedmont as a savanna under water several months of the year, places a nonexistent lake in western Carolina, and says he crossed "a barren Sandy desert" on his return journey. The reasons for these errors are explicable: he followed the marshy river valleys leading up to the Virginia Blue Ridge during the spring freshets; the location and description of his "Lake Ushery," which he places beyond his actual route of travel, are similar to those found on most maps since Mercator's in 1606; and the "Arenosa Desert" resulted from his memory of crossing the Carolina pine barrens in July heat. These errors, soon incorporated in the first Lords Proprietors' map of Carolina (1672) by John Ogilby, the royal geographer, and followed by many later maps of the Southeast, have caused some historians to question unjustly Lederer's entire account and dismiss it as unimportant.

On 26 Aug. 1670 Lederer undertook a third "march" in northern Virginia in company with Colonel John Catlett and others, following a tributary of the Rappahannock and climbing a peak on the Blue Ridge. Discouraged by the endless vista of the Appalachian ranges westward instead of the hoped-for "Sea of China," they returned. Shortly afterwards, Lederer moved to Maryland where he gained the confidence and friendship of Sir William Talbot, then the powerful secretary of the province. By April 1761 the Assembly had granted him full citizenship. Talbot translated Lederer's account from Latin to English and took it with him to England, where it was published with a map as The Discoveries of John Lederer In three several Marches from Virginia, To the West of Carolina (London, 1672).

By 1674 or before, Lederer had moved again, this time to Connecticut where he was entertained by Governor John Winthrop, who sent him on medical missions and later corresponded with him. Lederer quickly developed a flourishing medical practice in Stratford and Stamford, but in early 1675 he decided to return via Barbados to Germany and disappeared from the American scene.

C. W. Alford and L. Bidgood, The First Explorations of the Trans-Allegheny Region (1912).

Ogilby, John. Circa 1671. "A new discription of Carolina by the order of the Lords Proprietors." North Carolina Maps. University of North Carolina at Chapel Hill. Online at http://dc.lib.unc.edu/cdm/ref/collection/ncmaps/id/498. Accessed 03/12/2013.

"A map of the whole territory traversed by John Lederer in his three marches." Image courtesy of Research Laboratories of Archaeology, UNC.  Available from http://rla.unc.edu/Archives/accounts/Lederer/LedererText.html (accessed May 24, 2012).