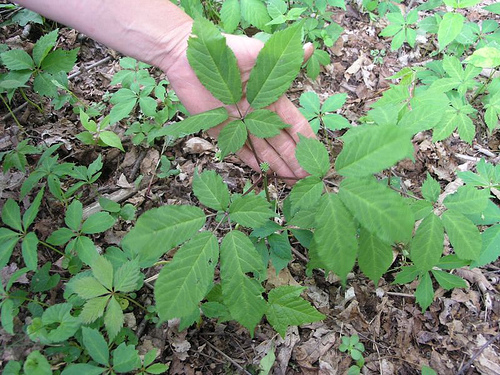 American ginseng (Panax quinquefolium) grows wild in the deciduous forests of North Carolina's Appalachian Mountains as well as in the upper Piedmont. Often found on the north slopes of heavily shaded coves, distinctive whorls of five leaves, bright red berries, and yellow leaves in the fall make ginseng easily distinguishable from other plants. The mature root, growing up to eight inches long, looks much like a human figure, leading some to call the tuber "man-root." In North Carolina Mountain parlance, ginseng is sometimes called "sang," "seng," or "sangtone."

The native peoples of North America had long utilized the attributes of ginseng when colonists, the first being a Jesuit missionary priest named Joseph Lafitau in 1715, began to value the plant. Highly prized for its purported medicinal and aphrodisiac qualities, nearly 400 tons of ginseng were exported, mostly to Asia, from the United States in 1824. Even the famed fur trader Daniel Boone, whose family once resided in present-day Davie County, collected ginseng. The extraordinary value of ginseng is seen in an advertisement, dated 1 Apr. 1927, for roots and herbs by Statesville's Sig Wallace, who offered 1 to 10 cents per pound for other roots but the relatively phenomenal price of $10 a pound for wild, carefully collected ginseng.

As wild growths of ginseng are diminishing in quantity throughout North America, attempts at cultivating the plant have been made. Because the North Carolina Mountains remain a significant source of wild ginseng for both domestic and foreign markets, the Plant Industry Division of the North Carolina Department of Agriculture and Consumer Services, working with the U.S. Fish and Wildlife Service, runs the Plant Conservation Program to regulate ginseng's trade within and export from the state. The trade in wild ginseng brings in over $3 million annually to the state; approximately 3,000 ginseng collectors, often Mountain folk who depend on the income to supplement a subsistence lifestyle, receive at least $200 to $300 per pound from the more than 40 permit-holding dealers, who mostly export to places such as Singapore and Hong Kong. As wild ginseng is a legally protected plant, considered by the state to be of "special concern," collection is prohibited during the summer growing season, and only roots at least five years old and with three prongs may be sold. Collection is prohibited in state and national parks.

Has ginseng plant ever been

Thank you for your question! I suggest contacting the Harnett County Center of the NC Cooperative Extension. They have experts who may be able to address your question. Here is a link to their website with contact information: https://harnett.ces.ncsu.edu/people/

I own less than 50 but more

I own less than 50 but more than 20 acres. How do I get a permit to harvest and sell ginseng from my own property?

The article doesn't say you