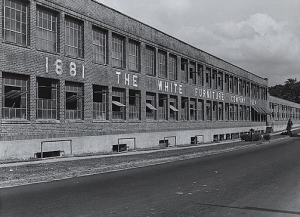 The 1860 industrial census lists 5 of the 37 cabinet shops in the state as using steam equipment to power operations. The ensuing Civil War and its aftermath effectively put an end to most such enterprises. However, by the late nineteenth century the furniture industry in North Carolina had regained much of its earlier momentum. Piedmont North Carolina was well suited for industrial development at this time. Improved railway transportation in the area, along with large stands of hardwood forests, attracted developers. William H. Snow, a native of Montpelier, Vt., had moved to Greensboro shortly after the war and established a spoke and handle factory with the financial backing of friends. In 1871 he moved to High Point, where he founded a factory that produced shuttle blocks and bobbins from native hardwoods for the northeastern textile mills. His son, Ernest A. Snow, started the Snow Lumber Company in 1881. That year, David A. and William E. White founded a plant in Mebane to produce spindles for the textile industry. The White brothers quickly turned to the manufacturing of furniture. Subsequently, Ernest Snow joined forces with John H. Tate, Thomas F. Wrenn, and M. J. Wrenn to form the High Point Furniture Manufacturing Company in 1889. In 1887 the Goldsboro Furniture Manufacturing Company was chartered in Goldsboro. Soon these and other small factories were producing inexpensive lines of wooden household furniture for a demanding southern market. 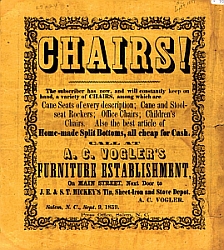 The founders of many of the state's first furniture factories sold their interests and started new enterprises with others who had available capital. The early furniture industry was driven primarily by individuals from the business and professional community who pooled together money to erect buildings and install machinery. They hired experienced superintendents (who often had worked in northern furniture factories) to choose and train local workers to operate the facilities. The agricultural depression of the 1890s forced many farm workers out of the country and into developing towns, and North Carolina's early furniture factories took advantage of this relatively inexpensive, unskilled labor force.

By 1900 there were 44 furniture factories in High Point and the surrounding towns of Thomasville, Lexington, Salem, Marion, Mount Airy, Statesville, Hickory, and Greensboro. The central location of the Piedmont made High Point a natural shipping point for southern markets that desired inexpensive, well-made furniture. The industry was also given a boost when several national mail-order companies, including Sears, Roebuck & Co., purchased large lots of North Carolina furniture to market nationwide through their catalogs. Other allied manufacturers set up factories in High Point to provide veneers, plate glass, mirrors, paint, and locks to the furniture companies. 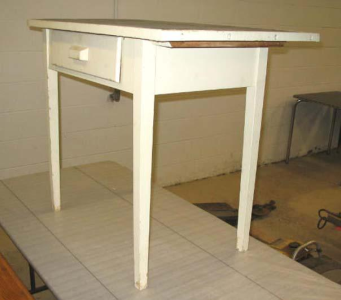 The first decade of the twentieth century was marked by large profits for many North Carolina furniture producers, although by 1910 such prosperity had become more elusive. An increase in the number of factories meant fierce competition for a share in the market and the hiring of competent, experienced workers. Factory operators faced rising labor costs as well as higher costs related to shipping. There were numerous bankruptcies resulting from inexperienced managers who either sold their products well below the cost of production or expanded operations far too quickly. Some companies merged to avoid bankruptcy and actually strengthened their positions. The Standard Chair Company of Thomasville was formed in 1906 from the Lambeth Chair Company, the Cates Chair Company, the Standard Chair Company, and the Thompson Chair Company. It became one of the largest chair-producing firms in the South.

Many manufacturers realized that they could no longer approach furniture making with the simple formula of money, material, and manpower. Several companies began to focus on improving quality and production practices. The White Furniture Company in Mebane developed a solid reputation for quality furniture production. In 1913 it also became the first furniture plant in the South to use electricity to power its machinery. Company officials hired an "efficiency engineer" in 1916 to analyze the factory operations and make recommendations to improve the production process. The Tomlinson Chair Company of High Point was one of the first companies to manufacture quality period reproduction dining and living room suites on a large scale. The company also took an innovative approach in the treatment of its workforce by giving them the opportunity to share in the company profits. Any employee who exceeded their monthly quota would receive a percentage of the profit. In addition to this, Tomlinson provided group life insurance to its workers.

I am trying to find historic

I am trying to find historic information about Kernersville Furniture Manufacturing Company. I know they were making furniture in Kernersville, North Carolina.

By reading this you can tell

By reading this you can tell the difference on how furniture was made back in the 1800 till how it is made now. The people take more time in makeing items now.