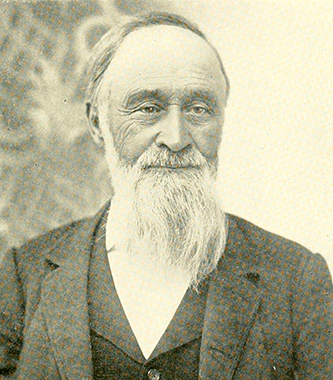 William Henry Snow, lumberman and furniture manufacturer, was born at Montpelier, Washington County, Vt., the son of William and Emily Haynes Snow. His father, a farmer and stock raiser, disappeared on a stock drive to New York State, presumably robbed and murdered. Left an orphan at a young age and raised by relatives, he began work in a woolen mill. In 1849 he married Lydia Jane Cramer (1830–1902), and they became the parents of two children. In 1851 they moved to Lowell, Mass., an industrial center. Before the end of the year he was engaged by the British government to install a telegraph line in Australia from Melbourne to Sydney—the first south of the equator. After five years there he returned to Lowell, having visited several South American countries en route home, where he opened a packing house and operated a provisions store.

Early in 1861 Snow set out for California, but in Chicago he learned of the eruption of the Civil War and returned to Lowell. There he recruited a company that was mustered into the Eighth Massachusetts Heavy Artillery. Commissioned captain, he commanded the company throughout the war, serving near the end of the conflict in North Carolina.

Back in Lowell he discovered that his wife was suffering from tuberculosis, and physicians advised that they move to a more healthy climate. Remembering pleasant weather in North Carolina, Snow moved his family to Greensboro, where his wife's health was restored. It has been said that sawmill owners in the vicinity of Archdale, from which finished lumber was usually available, refused to sell the Yankee newcomers lumber for their new home. Snow turned to the Guilford County forests, from which he cut his own timber.

In these new surroundings he was alert for an opportunity to establish himself in a business when he further recognized the potentials offered by the abundant hardwoods, such as hickory, dogwood, and persimmon trees, that grew there. He opened a factory in Greensboro to produce spokes for wheels and handles for mallets used in quarries; hickory proved to be an excellent wood for that purpose. In 1871, probably because his factory in Greensboro burned, he moved to High Point on the North Carolina Railroad and reestablished his business. From the abundant dogwood and persimmon trees, even harder than hickory, he began also to manufacture shuttle blocks for use in textile mills. He was able to meet the growing demand for all of these items and soon was recognized by mill owners as the leading source in the nation for excellent shuttle blocks and bobbins. To increase production, Snow brought to North Carolina the first Blanchard lathe and the first band saw to be used in the state. His successful operation of his Snow Lumber Company, which sold good quality lumber up and down the East Coast, attracted wide attention and led to the development of an extensive lumber industry throughout the South.

Snow also purchased land and began growing tobacco; in time he devised improved methods of curing tobacco. Instead of curing whole stalks, he cured individual leaves strung on wire. He also erected smaller barns and modified the heating method through controlled roof ventilation—a device that he patented. He taught others how to follow this new system and is said to have published folders or pamphlets explaining it. In addition, he was the original promoter of the Asheboro Railroad and invested large sums of his own money towards its construction. For thirty years Snow was regarded as the leading spokesman for the industrial development of High Point and served seven terms as mayor. For a time he also was postmaster. His son, Ernest Ansel, who had emigrated from Vermont with him, was a salesman for lumber produced by his father's sawmill and in time became president of the Snow Lumber Company as well as a leader in the development of the area's furniture industry. By 1887 High Point was considered to be the "most important manufacturing town on the North Carolina Railroad."

Snow's daughter, Bertha Emily, married Jonathan Elwood Cox in 1878, and shortly afterwards Cox joined Snow in the production of shuttle blocks and bobbins. In time Snow withdrew from the business in favor of his son-in-law, and it became the J. Elwood Cox Manufacturing Company; after forty years Cox turned it over to his nephew, Joseph D. Cox. A Presbyterian and a prewar Whig, Snow afterwards became a Republican.